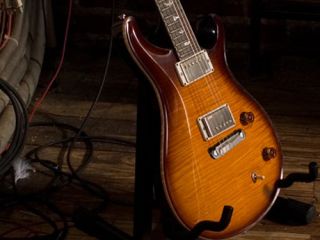 NAMM 2011 PRESS RELEASE: For more than 25 years, PRS Guitars' culture of ingenuity and continual improvement has pushed their guitar manufacturing bar to new levels. The 2011 PRS product line exemplifies this culture with the execution of a thorough plan to enhance each instrument.

Innumerable changes have been put into action to improve the appearance, playability and tone of PRS instruments.Whether it's the new 53/10 pickups, two-piece bridge, steel bridge components, new neck shapes, V12 finish or new PRS Phase III locking tuners, the amount of time and energy PRS has invested reviewing, enhancing and implementing high impact changes in their quest for tone is unprecedented, even by PRS standards.

Whether obvious or subtle, every modification is born from PRS's desire to give musicians the highest quality instrument to create their art.

"We learn, we update, we learn, we update…that's the whole jist of the company. Everything we've learned is being applied to our model designs as fast as we can implement the changes without compromising the quality of production," said Paul Reed Smith.

The 53/10 pickup is the latest in the series of humbucking pickups that already includes PRS 57/08 and 59/09's (and the smaller aperture 57/08 Narrowfield). First debuting as part of a limited run in the summer of 2010, the distinct 53/10 is the warmest-sounding of the vintage themed family.

The 53/10 coil wire is made on the same machine that supplied legendary guitar makers in the fifties. Wire specifications for the 53/10 are slightly different than the others and the wire is made using a special process reserved for a single-coil bridge pickup circa 1953; however, the 53/10 is a humbucking pickup.

Smith commented, "There are single-coil guitars from that era that are beautifully big, fat sounding guitars." With that tone as inspiration, 53/10™ pickups are similar to the original 57/08™ but with a "sweeter" high end.

PRS Guitars new Phase III tuners are also new to the line up for 2011 and will come standard on SC 58, McCarty 58, ME Quatro, and JA-15 models. These very smooth high- tolerance pegs feature an elegant design with larger buttons, an open back, and closed housing.

The bridge plays a crucial role in the tone of a guitar by transferring the string's vibrations to the tonewood. When executed well, the bridge will enhance the wood's natural resonance. The PRS Tremolo with steel components offers a clear, expansive tone that sounds especially pleasing in guitars with singlecoil tones.

Previously only prototyped on Private Stock guitars, the new PRS two-piece adjustable bridge now comes standard on two PRS models: the SC 58 and the JA 15. When executed well, the bridge will enhance the wood's natural resonance.

Neck shapes have always been a high priority for PRS and a hallmark of our quality. A guitar should feel comfortable, like 'hom'e, as soon as you pick it up, and the neck is paramount to that connection. The new Pattern Regular neck shape is similar to the traditional PRS regular neck found on guitars made in the late 80's at PRS's former Virginia Avenue location.

This new neck shape reflects modern tooling and programming that allows us to even more preciously shape and consistently reproduce our necks.

Perfected after years of prototyping, the new Pattern neck is an updated Wide Fat PRS neck style based on Paul's pre-factory design. These necks were found on the instruments built for Carlos Santana, Peter Frampton and Howard Leese from the late 70's to the mid 80's. The Patten Thin neck follows suit and is an updated version of PRS's Wide Thin neck.

Finish should enhance the look, sound, and feel of a guitar by accentuating the wood's inherent beauty and feel without hindering its natural resonance. And PRS Guitars' new V12 finish does just that.

Introduced at Experience PRS 2010, V12 is a very thin, hard, and clear finish that will not crack or react with thinners. After roughly 12 years in development, it is halfway between acrylic and nitro but with a classic feel all its own. "PRS models with this new finish feel and sound like old instruments," said Paul Reed Smith.