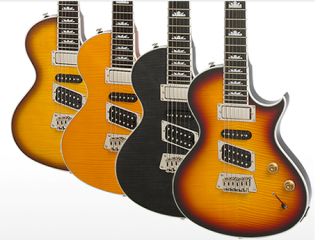 NAMM 2011 PRESS RELEASE: Like its parent company Gibson, Epiphone is known for several classic designs, guitars that established themselves as iconic in the 1950s and '60s.

But the company has continued to grow steadily ever since coming into the Gibson fold in 1957, and many new designs of the late 20th and early 21st century have earned a status as 'modern classics' right alongside the vintage models from the company's golden years. The Nighthawk is certainly one of these.

Introduced by Gibson in 1993, it instantly became a favourite with blues and rock guitarists who wanted a powerful single-cutaway set-neck design with a few contemporary twists to offer the versatility demanded by modern musical styles.

The Epiphone Nighthawk Custom Reissue celebrates the most exotic rendition of the Nighthawk line, with a custom look and a deep features set that make it as elegant a showpiece as it is a stellar performer.

Just one glance confirms that the Nighthawk Custom Reissue is a stunning looker: it carries a Grade-AAA flamed maple veneer top finished in your choice of Fireburst, Honeyburst, Trans Amber or Trans Black, complemented by mother-of-pearl 'crown' inlays in the ebony fingerboard that echo the classic crown inlay in the traditional Epiphone headstock.

But the Nighthawk Custom Reissue's beauty is far more than skin deep, and under the hood this guitar is loaded for versatility and performance. The unique Nighthawk pickup package of a bridge humbucker, a single-coil in the middle, and a mini-humbucker in the neck yield a mind-boggling array of tones through a five-way switch and push-pull coil taps, allowing you to access anything from classic fat, creamy Les Paul tones to spikier single-coil-style jangle and chime.

The unique through-body Nighthawk bridge provides outstanding sustain and resonance, while the guitar's 25.5" scale length adds extra shimmer and sparkle to the brew, and gives you a firm low-E string for gnarly low-down blues runs and biting twang.