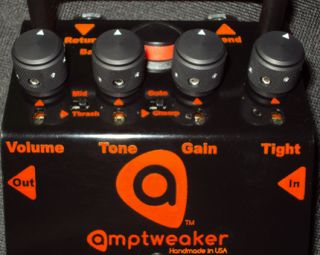 NAMM 2011 PRESS RELEASE: The new TightMetal distortion pedal takes the TightDrive and TightBoost overdrive platform to the next level and provides over-the-top metal and hardcore crunch tones with adjustable tightness thanks to the Tight control.

This issue came up early on when discussing various ideas with Mark Kloeppel, guitarist from the hardcore band Misery Index. Like many other metal players, Mark was looking for a particular guitar tone, one with a lot of harmonics but with the ability to stop the notes really fast to work with their music. The Tight control varies the pick attack from smooth and thick to tight and aggressive.

Just as high gain tube amps are designed by cascading extra tube stages, the TightMtal was created by adding additional stages in front of a carefully modified TightDrive. The resulting thicker and much heavier distortion is tweaked by a simple built-in output EQ curve, and can further be adjusted by the output Tone control, so it's easy to get a stack sound even through a small combo amp's clean channel.

After discussing some other consumer suggested ideas with Mark, a couple of switches were added: A Mid switch helps get a more traditional metal rhythm sound with its Thrash setting which gives a deeper scooped mid tone. To help stop the notes even quicker, a Noise Gate switch with an ultra quiet, quick decaying Chomp setting really helps a lot - especially when doing very quick riffs with a lot of palm- muted stops, so the whole band sounds even tighter.

All other features from the TightDrive remain intact, including the Effects Loop with its Pre/Post switch, the LED illumination of the controls, and the Battery On/Off switch and magnetic battery access door