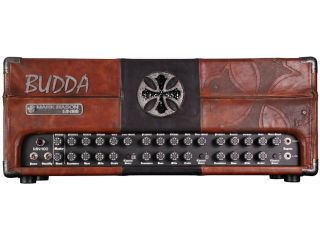 The MN-100 also features dual 5U4 rectifier tubes and a solid-state rectifier, with the patent-pending PowerPan variable rectification control that allows players to open uncharted tone territory by selecting full tube rectification, diode rectification or anywhere between the two.

The effects loop on channel 2 can also be used as a global loop for incredible versatility in effects routing. The included nine-button footcontroller digitally switches via MIDI all three channels, effects loops and Overboost functions, as well as Master Reverb and Master Boost, a second Master Volume control that can be used to boost the overall volume of the amp.

The Budda MN-100 also features a half-power switch for operating the amplifier in either 50 or 100 watt mode. The back panel also features an amplifier chain section with power-amp inputs and a slave output, impedance selector and MIDI input and output for use in MIDI-switching rigs. The matching MN-412 cabinet features four Budda Phat 12 loudspeakers and Mark Nason leather covering.

The Budda MN-100 and MN-412 will be available in Q2 2010 from authorized Budda Amplification retailers.