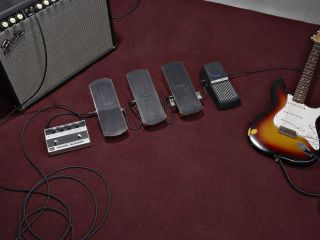 Following the recent reissue of the Fender Blender Custom pedal, Fender has launched a range of new classic-inspired stompboxes with seriously cool vintage tones and cosmetics.

The Fuzz Wah and Volume/Tone feature clever dual action treadle plates that not only rock forwards and backwards like a traditional wah-wah, but also move from left to right.

For example, when using the Fuzz Wah, rocking back and forth manipulates the wah-wah filter envelope as you would expect, while moving the treadle to the right increases the amount of fuzz.

The Phaser, meanwhile, has a large illuminated dial that is easy to manipulate on the fly with judicious use of a foot.

Here's Fender's new Phaser being put through its paces at NAMM: