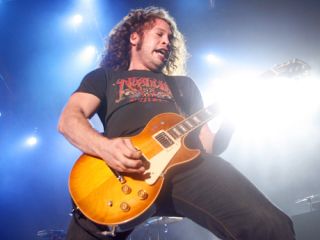 Ray Toro rocks out during a My Chemical Romance concert in Taiwan, 2008. © Nicky Loh/Reuters/Corbis

With the upcoming release of Danger Days: The True Lives Of The Fabulous Killjoys, My Chemical Romance are intent on building on the success they enjoyed with 2006's multi-platinum The Black Parade.

Getting there wasn't so easy, however, for the New Jersey-based band, which consists of singer Gerard Way, his bassist brother Mikey, along with guitarists Ray Toro and Frank Iero (drummer Bob Bryar departed earlier this year). Throughout 2009, the group worked with producer Brendan O'Brien (Pearl Jam, Rage Against The Machine, Bruce Springsteen), desperately trying to reinvent themselves and capture magic...to no avail. At the beginning of 2010, the band made the painful (and no doubt costly) decision to shelve the album and start all over again, this time reuniting with Black Parade producer (and newly minted Warner Bros Records Label Group Chairman) Rob Cavallo.

"It was a hard decision to scrap the record we had made with Brendan, but in the end it was the right decision," says Toro. "Nobody was feeling quite right about what we had done. There was no joy in the record. It had nothing to do with Brendan. We were the problem."

MusicRadar recently sat down with Ray Toro to discuss the making - and remaking - of Danger Days: The True Lives Of The Fabulous Killjoys and to talk guitar. We also got the skinny on what it's like to play one of Jimi Hendrix's Stratocasters.

The difficulties in recording Danger Days the first time, is there anything specific you can point to?

"We were just burnt out. The touring schedule on The Black Parade was very hectic, and it probably went on six months longer than it should have. When we started talking about what the next album should be, we saw The Black Parade as the enemy - it was a big, theatrical rock record, and we were wearing the costumes and stuff. We wanted to go the other way.

"So we spent 2009 writing and recording and trying to do a real stripped-down record. I remember distinctly, whereas in the past I would have laid down a bunch of different guitar tracks, harmonies and stuff, this time I said, 'No, I can't do that.' After a while, it started to feel like I was going against my nature."

Did Brendan ever say to you guys, "This is good, but it's not great?"

"He was really trying; he did the best he could with us. He knew things weren't clicking, and he'd try to rally us. I remember he said, 'Hey, on some songs, I'd love to hear you do what you did on The Black Parade.' Because there wasn't any of the harmonized guitar parts or the stacking that I usually do. He was trying to get us to make one record, and we wanted to make something totally different.

"Musically, we wanted to go back to our basement. But just because we wanted to do something different didn't make it easy. In many ways, we felt as though we were holding ourselves back creatively. We were going through the motions. Some of the songs were good, but we weren't happy with all of them."

Did any songs from the original sessions make the finished album?

"Yeah, but we recut them. There's Bulletproof Heart, Party Poison and a song called The Only Hope For Me Is You. Those songs always excited us, so we weren't going to lose them."

Having worked with Rob Cavallo on The Black Parade, I assume he was the natural choice to come in after you tabled the first attempt at Danger Days.

"Rob's always been one of our biggest cheerleaders, and he and the rest of the guys at the label totally backed our decision to start over again. Originally, Rob came in to work on some mixes and see if he could help things along, but before long it became clear what we had to do.

"With Rob, we got the band back. We got out creative energy back. I think one of the problems with the sessions with Brendan was, we had already decided what the album should sound like, and in hindsight, you really can't do that. You have to let the music speak and be what it wants. We found our sound again, and it was exciting."

The record seems like a stark contrast to The Black Parade. It's more hopeful and upbeat.

"It's weird. That wasn't the goal at any point. I think it was just how we were feeling in the studio once we got back on track with Rob. In 2009, the record was kind of strange, and not everybody in the group was sold on what we were doing. Once we got going with Rob, like I said, our spark came back. So maybe that's why it sounds, you know, the way it does."

As a guitarist, who are your influences? Who did you listen to early on?

"Really, my biggest influence was my older brother, Louie. He was awesome, man. He was 17 or 18 when he started playing. I shared a bedroom with Louie and my other brother, Ed. And I just remember being in bed and hearing Louie play the guitar till all hours of the night and into two in the morning. He was great.

"That's how I first got into the guitar, from hearing and watching Louie. He was into Zeppelin, Pink Floyd, Hendrix, Metallica, Motley Crue - a lot of classic rock with some metal thrown in. So I got into that stuff as well. He helped me out a lot. He had a stack of Guitar World magazines - I'd go through them and look at the tabs. Then I got more into guys like Jeff Beck and David Gilmour."

How did you develop your style into what it is now?

"I think it's a mixture, the classic rock and then more metal bands. Megadeth, Pantera, Metallica, Iron Maiden - I think I have more of a faster-riffing, minor-key kind of thing going on. Then, as I got older, I got into punk bands. So I mix it up: I love the attitude of punk, but I love the precision of a lot of the metal players."

With influences such as you mentioned, what kind of practice schedule do you adhere to? Punk players are more about vibe and spontaneity -

"I know what you're getting at. I definitely used to practice more. I think I found that the best middle ground is one where you're hitting your notes and feel comfortable on the fretboard, but you still want to leave room for attitude and freshness. Listen to a guy like Stevie Ray Vaughan, who's one of my favorites. He's a flawless player, but you hear the heart and soul there - he's reacting for the moment."

How did you come to join My Chemical Romance?

"It's funny. Gerard said that I was the best player he'd ever heard, which kind of floored me. I don't think that's true, but it was nice that he would say that. I didn't have to audition or anything. We were friends, so he already knew what I could do. I think he knew that I was always trying to push myself as a player.

"And I still am. I love searching for new lines and parts. Every song is a challenge. That's what keeps me excited. For instance, there's a song on the new record called Planetary (GO!), and I had to try to figure out how to make the guitar sound like a keyboard or a synthesizer. What I ended up doing was using an Electro-Harmonix POG, which is one of my favorite pedals. It's sick - you have all of these octaves to play with. So I found some great sounds to use there.

"On a song like Save Yourself, the playing is more precise, with heavy palm mutes on the verses. The solo is more of a pentatonic thing, kind of like what Kirk Hammett might play. So exploring all of those aspects but trying to keep it fresh and with a bit of a punk spirit is what keeps me going."

Two guitar bands are funny animals: one guy can't do what the other guy does. Do you find that you have to change your style or hold back in any way to play with Frank?

"No, not at all. I love playing with Frank. Our styles are very distinct. He's much more melodic than I am. If you listen to him, he's always harmonizing with or backing up the vocal melody. His guitar is more like another lead vocal. I guess I'm the 'lead guitarist' per se, but we're always swapping roles. Sometimes he does little leads on the choruses. He so free. He's got an energy that I find very inspiring."

In the past, you've played Les Pauls pretty exclusively. Are those still your go-to guitars?

"Yeah, definitely. But I'll tell you, recently I had the chance to play one of Jimi Hendrix's Strats. Totally mind-blowing! This guy, Jimmy from Mates Rehearsal Studios in California, has one - I had shown for practice, and I didn't have a guitar to play. So Jimmy let me play this Hendrix Strat that he got from Jimi's old guitar tech. The thing was beat to shit, but it was the best-playing guitar ever. I played it for a year - Jimmy let me use it in the studio. Man, I loved that. It was fucking awesome!

"Live, I'm still a Les Paul guy, but playing Jimi Hendrix's Strat really got me interested in Strats and other guitars. In fact, I'm in desperate search for the ultimate Tele to play. If I can find one, I'm there."

Lastly, let me ask you about your drummer situation. You recently got a new guy in…