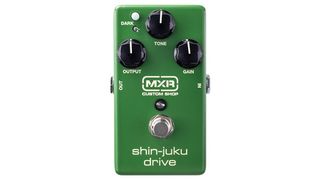 MXR has announced the latest addition to its burgeoning overdrive pedal roster: the limited-edition Shin-Juku Drive.

A collaboration with Shin Suzuki, Japan's celebrated amp tech and pedal designer, the Shin-Juku captures the sound of "one of the rarest and most sought-after amps ever made". And for most guitarists, that means one thing: the Dumble Overdrive Special.

Utilising Shin's knowledge of that amp's innards, the Shin-Juku promises big sustain and a fast response that spans always-on sweetening to grinding overdrive.

Three knobs - output, tone and gain - do the business, while a dark switch cuts the highs for a mellower tone.