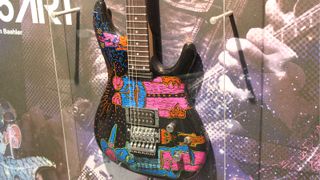 MUSIKMESSE 2015: In celebration of the 25th anniversary of Joe Satriani's ever-popular JS signature model, the guitarist has teamed-up with Ibanez to produce 50 special hand-illustrated models, dubbed the JS25ART.

The announcement was initially made back in February, but Musikmesse 2015 is the first time we've had the chance to see one for ourselves. The pictured guitar is serial number F1503550 and is currently being displayed on the 'Messe show floor.

Like its 49 brethren, F1503550 was hand-drawn by Satriani at Ibanez's LA base late last year. Every guitar in the range has its own unique illustration and they're all signed by the man himself.

Here's what the Satch had to say about all this arting about:

"The JS25ART guitar project has been an exciting and profound artistic experience for me. It's also proved to be the perfect way to celebrate my 25th anniversary with Ibanez Guitars.

"I illustrated every instrument by hand and was thrilled to see my collection of aliens and strange characters come to life on the signature JS bodies. The crazy colours create a 3D-like quality as they appear almost animated on the black undercoating and interact with the high gloss finish.

"Each guitar features a one of a kind set of drawings designed to surprise, inspire, and make a bold original statement. I've signed each one on the back so you know this is an authentic original work of art.

"I hope you enjoy owning and playing these guitars. And, yes, they should be played!"

Fans of Satch's art will also be pleased to learn that the guitarist is also reportedly putting his skills to work on a new animated series, named after his 1998 album Crystal Planet and produced in conjunction with animator Ned Evett.