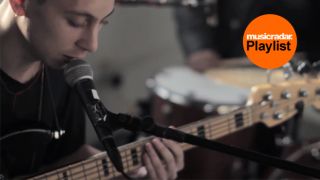 After a brief hiatus, the MusicRadar Playlist has returned! Below you'll find a selection of the music we've been enjoying in the MusicRadar office over the past few weeks.

As ever let us know what you're listening to, what you're enjoying, and what's inspiring your music making via Twitter and Facebook.

The two brothers that make up LA duo Inc. have both formerly served as session musicians for likes of Pharrell, Elton John and Cee Lo Green, so it's little surprise that the pair do an excellent job of channelling classic Prince-style r&b and vintage pop on their debut album, No World, which is released next week. (Si Truss)

This spritely new single from the hotly-tipped Mvula twists and turns like an untamed wisteria, with elements drifting in and out underneath her already signature layered vocals. (Ben Rogerson)

2013 is the year that 1962 makes a serious comeback. The Ruen Brothers are a pitch-perfect homage to the early '60s, all Big O vocals and drama. Walk Like A Man gives you a pretty good idea of why labels have resorted to guerilla warfare in order to sign them. File alongside Irish retro-fetishist teenie-rockers The Strypes. (Rob Power)

Released ahead of forthcoming album The North Borders, this rhythmically charged teaser is doing plenty to build anticipation. You can have a free download of it, too. (BR)

Stornoway - Knock Me On The Head

Ah, the mighty Stornoway, Oxford's wide-eyed folky dreamers, return to the fray with second album Tales From Terra Firma. Hearing Brian Briggs sing about sea birds is always a good thing, making Knock Me On The Head the perfect reintroduction to his homespun brand of melodic magic. (RP)

Gentlemen - Sailor (Of The Cosmic Ark)

They appear to be about 10 minutes old, and yet Gentlemen already do a fine line in bubbly, reverb drenched psyche-pop and have a video featuring a spaceman having a breakdown in the snow. Well done them. (RP)