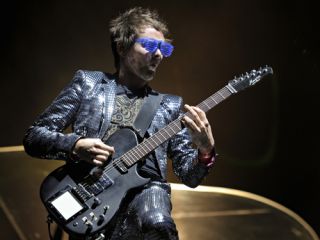 Seriously now, can you picture Matt Bellamy as a spaceman? © Amy Harris/Corbis

Muse frontman and guitarist Matt Bellamy has made his fair share of spacey sounds, but now he wants to go all the way - by taking off into outer space with the band to record a song or music video.

Bellamy said that he had been trying to persuade entrepreneur Richard Branson to give Muse a free flight with Virgin Galactic when they launch their commercial flight program.

"We're trying to blag a free trip on it [Virgin Galactic]," he said. "I'm going to try to convince Richard Branson to let us make a music video or record a song up there. I think that would be cool. Would I be scared? I think I'll be all right."

Bellamy's interest in astronomy apparently was sparked after he was given a telescope as a gift from fans in Russia. "The crowd in Moscow were probably the most intense we've ever had," he said. "They were going mental and they bought me a big telescope. It's a big, real, serious piece. I set it up when I got home and looked at the moon. Fucking hell, have you ever looked at the moon through a telescope? It's all mountains and stuff - it's unbelievable."