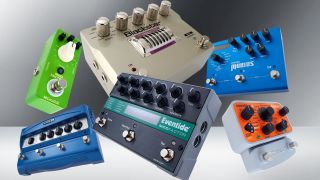 From the Mooer Mod Factory up to the Strymon Mobius, there's an option for every budget

Do you want a phaser, a chorus or a flanger? How about one pedal that has them all? We give you the lowdown on the beast that is the multi-modulation pedal...

Okay, what exactly is a modulation effect, anyway?

Modulation effects are a broad group encompassing the likes of phaser, chorus, flanger, tremolo and vibrato pedals, plus other variations on the theme such as the rotary speaker, ring modulation, and stereo panning.

They are generally used to add motion and depth to your sound, whether that be the gently undulating throb of a tremolo, the 'jet taking off' swoosh of a flanger or the sense of multiple instruments often engendered by a chorus pedal.

Broadly speaking, modulation is a term that describes the cyclical changing of a parameter used in some aspect of a pedal's operation.

Different parameters are modulated in different effects - in tremolo, it's a periodic change in amplitude (volume), with vibrato it's a change in pitch, while chorus and flanging effects come from a modulated delay that's mixed back into the original signal.

There's no room here to go into technical detail, but most modulation effects found in a pedal are likely to have knobs to alter the speed and the depth of the effect.

Well, if I want a phaser why not buy a phaser?

Sure, no problem, but what if you then decide you need a chorus pedal and then a flanger? Your pedalboard is going to start to get a bit unwieldy with more space taken up, more leads and more power supplies.

It's also quite likely that you'll only want to use one modulation effect at a time, so it makes sense for many of us to have a single pedal that can take care of all of those different modulation sounds - and it's these types of 'multi-effects' pedals that are the focus of our six mini reviews.

As many of the modulation effects are quite closely related and rely on a VCO (Voltage Controlled Oscillator) at the heart of the circuitry, it is possible and also cost-effective for manufacturers to put several of them into a single specialist pedal.

Then you'll either need separate phaser and chorus pedals or you'll need a multi-effects pedal that will let you have both at the same time.

None of the pedals in our test do that, but there are compact multi-effects pedals around (albeit not specialised multi-modulation pedals) that will do it: check out the Zoom G3 or the Line 6 M-Series pedals.

Where do I place one of these in my signal chain?

Well, the general advice on modulation pedals is to have them towards the end of your signal chain: after any distortion pedals, but before delay and reverb. This works fine for most situations, although many vintage phasers can sound more organic when placed before drive pedals.

Take the example of two players synonymous with the Uni-Vibe, an early four-stage phaser. Jimi Hendrix placed his Uni-Vibe at the end of his pedal chain, Robin Trower places his towards the beginning of his chain. Both sound pretty good to our ears, so it's worth experimenting.