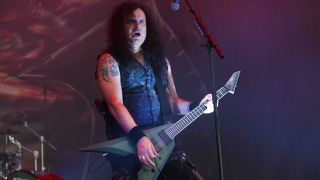 Mille with his LTD MK-600: "I feel like I have the model I always wanted" (Image credit: IBL/REX/Shutterstock)

When most people hear the words 'thrash metal', they'll think of the American bands that dragged heavy music to its extremes in the early '80s. Metallica, Slayer, Anthrax and Megadeth have certainly cemented their status as The Big Four of the genre, but the noise made by their German cousins across the pond always felt that much darker and grittier.

Kreator, Sodom and Destruction - known in some circles as the Teutonic Three - lacked much of the sheen found with their American counterparts, but made up for it in brute force.

"I've got nothing against the Black Album, it's probably Metallica's most successful record," says Kreator singer/guitar Mille Petrozza, who founded the band in 1982.

"So more power to them! You can't really say anything bad about a band like that because none of us would be here if were not for them. I certainly would not be here; they were very influential to us early on…

"But writing a Black Album wouldn't have worked for Kreator. We experimented in the '90s, absolutely, and we tried different sounds. We went a little more goth or new wave, or added some industrial in there, we even had some hardcore elements - but we never lost our focus. We always had to sound like Kreator."

Now 14 albums in, it's clear Mille Petrozza is a man of his word. Perhaps that's why their last full-length, Phantom Antichrist, charted higher than any of its predecessors, and this year's Gods Of Violence looks set to do the same.

In an industry that's grown accustomed to its fair share of doom and gloom, where figures get lower and budgets tighter, Kreator seem to be thriving. So what's the secret?

"You should never let go of that pissed-off 18 year-old metalhead in you," laughs Mille, with a mischievous gleam in his eyes.

"Once you lose that, there's no reason for you to release music. It's a hard fight. You always should question what you do and never be afraid of criticism.

"Working in the studio makes you dig deeper - our producer Jens Bogren has no problem telling us if something sucks to our faces. He'll say, 'Do something more creative or complex… this is Kreator!' And he's right: you can't be lazy about it."

"I don't want to record anything that sounds my age - not that I'm unhappy with my years," he grins.

"We should be showing the younger bands how it's done… that feels like our goal. I know there are a lot of great young bands out there, and we need to compete with them, in a way. I don't want to make anything old and tired-sounding like a nostalgia trip; I want it to be exciting and relevant.

"Our music is not about being angry; it's about getting rid of anger. Channelling these negative emotions into something positive. To me, that's the essence of music, or at least metal."

Gods Of Violence is the first album to be released since Mille switched from his longstanding endorsement with Jackson to a new deal with ESP, resulting in the MK-600. As he explains, it's not the only recent change in the band's recording and live setup…

"I had my Jackson signature - I've always played them since the '80s. I got signed here in Europe and got to design my own limited guitar, but it wasn't what I thought it would be. Now with ESP, I feel like I have the model I always wanted.

"The main difference is the quality of the wood and the pickups, which are made by Fishman. Usually, it's a balance of tone and output - most pickups lose the tone when you crank up the distortion, but the Fishman has no problem."

Then, of course, is the Kemper Profiler amp that we've all seen replace many a valve head on stages around the world. For Mille, it offers consistency, affordability and flexibility with no sacrifice to the overall tone - at least for live settings.

"I use Kemper Profilers because they make my life easier and my guitar tech's life easier," he explains.

"In terms of logistics, the benefits really are quite amazing for any travelling band. So now I don't use pedals, heads or cabs. I just go straight into the PA and, to be perfectly honest, nobody has complained yet.

"I've profiled my Engl amps, as well as an older Diezel VH4, plus an old 5150 - the very first ones, I don't like the latter models as much. I have a Mesa/Boogie Triple Rec profiled for lead parts, but the main sound probably comes from the Diezel.

"In the studio is where we get out the old-school pedals - the most important of which, at least for me, being the Ibanez Tube Screamer."

But of all his newest discoveries, it's an in-ear monitoring system that has truly changed the game for Mille. He talks about Kreator almost like a band reborn since its introduction to their live rig.

"Now we use in-ear monitors I can actually hear what I'm playing," Mille deadpans.

"At home, you don't need to worry about these things, but touring around the world you just need it. I know guys that are so old-school, who swear they'll never use them… some people are almost offended when you suggest it! I was a bit like that, and then I really got into it because I knew it was making me a better player. Before we got them, I honestly don't think we were that tight."

If there's any aspect of Mille's playing that would be considered the ace up his sleeve, it's his right-hand rhythm picking. Tight, snappy triplets and tremolo picking at breakneck speed are his forte, and from a technical standpoint, it's a musicality that could only come with years of training. Alongside fellow Kreator guitarist Sami Yli-Sirniö, they make one hell of a force indeed.

"I'm more of a rhythm player," admits Mille, "while Sami is an amazing lead guitarist. He can do things I cannot do and vice-versa. He can learn my riffs, but he could never come up with them.

"On the other hand, if I show him where the leads are going, he might change just one chord and tap into a totally different thing… I'd say he's the most talented guy in Kreator! When it comes to making a good song sound great, the final spices you throw in, he's amazing at that.

"He'll actually come up with different options for the solos built from different scales, while I'm self-taught - I only went to music school for half a year. I'm very traditional and old-school in that I don't actually know what I'm playing, haha! My biggest hero was probably James Hetfield, because he's one of the best rhythm guys around."

By his own admission, Mille has seen plenty of bands come and go in his 35 years of metal mastery. There's one mistake they all made which he didn't: giving up. He attributes that as the main battle for the modern-day musician…

"You should never give up," he offers.

"Life can be frustrating and get in the way. I've seen a lot of really excited young musicians lose their enthusiasm when reality checks in. If you feel like writing music, then that's what you should do. Follow your heart. It's not about being famous - it's about being happy with what you've created.

"Go into a room with your guitar and try to come up with a song that has never existed. You leave the room, and even if no one fucking hears it or likes it, it's your song. And that's the magic of music, regardless of whether you're playing in front of five or 5,000 people. Dedication is the only answer: ultimately, you have to make sacrifices."

Gods Of Violence is out on 27 January via Nuclear Blast.