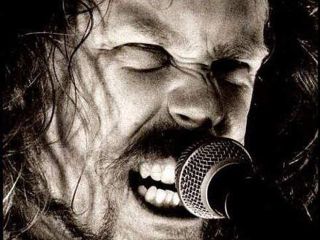 It's Metallica Week on MusicRadar!

Friday 12 September marks the long-awaited release of Metallica's Death Magnetic album. It's already been acclaimed as a major return to form, and is one of the most-anticipated albums of 2008. To mark its release, MusicRadar is going to give you a dose of Metallica every day until Friday.

Today is Day 3 in Metallica Week.

Back in late 1991, Metallica were riding high on the back of the globe-straddling success of their eponymous 'Black Album'. Guitarist magazine talked with the Riffmeister General, James Hetfield - then just 28 years old.

At the time Metallica were playing mammoth live shows clocking in at just under three hours, and in this interview, Hetfield explained what it takes to get through such a punishing stage performance:

Aren't you concerned that such a lengthy set is going to damage your vocal cords?

"It definitely puts pressure on my voice, and I've made sure that we're not doing more than three shows in a row. If I had to sing every night I'd be in big trouble. We want to sound our best every night and give 100% performance."

Have you had to train to build up your stamina for such a lengthy and arduous set?

"Yeah, definitely. When you've been locked in the studio for eight months you're not as active as you usually are - basically you develop a beer gut! - and it takes a while to get back into the touring swing.

"Playing for as long as we do, the sheer physical side of things really takes it out of you, and the way the stage is set up now, there's a lot more area to cover. It's a workout, no doubt. So we all had to get back into shape for this tour!"

Do you warm up before you go onstage?

"With the guitar I can pretty much go out there cold. I don't really have any solo or harmony stuff to do early on in the set, so by the time we're doing that I'm pretty warmed up. I might do some down-picking just to loosen up the muscles in my right arm, but I don't sit down and do a routine.

"I do some vocal warm-up work, and I've found that's helped immensely. I've never been afraid of it, but now that we are doing two and three-quarter hours a night, three nights in a row, I need to do something to preserve my voice.

"Your voice is like any muscle, you need to stretch it before you go work it out, and that's something I've only just discovered."

How hard is it to blend the roles of rhythm guitarist and singer, when your rhythm work is quite a handful on its own?

"Not that hard, actually. I had piano training when I was younger, and a piano is a 'two sides of the brain' thing, as is singing while playing rhythm. Obviously some of our songs are easier than others, so I work harder on the more difficult ones.

"It's all a case of concentrating more on one role than the other in the appropriate places. But it's more or less second nature now."

Down-picking is an integral part of your technique. How did you develop the strength and speed that this approach requires?

"It was always a kind of contest - who could down-pick the fastest - and mostly it was a battle between me and Lars, actually. It's a hard thing to do well, because your timing has got to be dead on.

"If you're playing eighth or sixteenth notes then you've got to get cooking. A lot of practice is called for to build up your strength. A lot of wanking too!"

And it's killer - read what Kirk Hammett tells us in a new interview, 25 years on, about the making of Kill 'Em All.