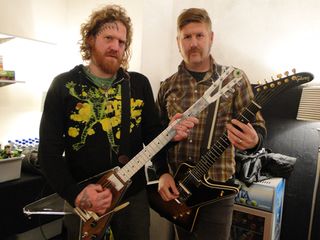 Guitarist Bill Kelliher phones his wife, in town from Atlanta, to figure out dinner plans; drummer Brann Dailor is deciding if he can run downtown to purchase a painting at an art gallery; guitarist Brent Hinds is looking forward to several hours of kicking back with his own self and some beers on the tour bus; and as for bassist Troy Sanders...well, nobody really knows what he's doing.

"This is when we tend to scatter," says Hinds. "We're together a lot on tour. You get us in New York before a show, and we're all over the place. Each guy does his own thing."

Dailor and Sanders have already scattered, but MusicRadar manages to corral Hinds and Kelliher in a dressing room for a chat about how the songs on Mastodon's recently released (and freakin' brilliant) album The Hunter are going over. In addition, we talked about their stage guitars (see the video on page two) and asked them about the question that's on everybody's mind: What in the world were you guys doing with Barney And Friends?

The songs on The Hunter are shorter and less progressive than some of your earlier numbers. Are they easier to play live? Easier to remember?

Brent Hinds: "Yes to both. Which takes the stress level down and cools the anxiety. As a consequence, we get to have more fun. With Crack The Skye, we were dealing with very intense material. The songs were difficult, very complex and escape-y, with lots of notes flying around everywhere. It's hard to get that stuff perfect."

Bill Kelliher: "The Hunter material has been easier to tackle. Crack The Skye took a lot out of us as players This new stuff is real upbeat, lots of fun. I don't want to say that Crack The Skye was depressing - it wasn't. But it was deep and kind of shoe-gazer. People would zone out to it. Live, it was hard to keep the crowd's energy up."

Hinds: "We were showing movies to it, taking people on this long and crazy ride. It was a vibe, an experience."

Kelliher: "The new stuff is totally in your face. It flies. It's not full of hills and valleys. Let's be honest: for the most part, a live show is still about getting the crowd going. When we did Crack The Skye in its entirety, the audience would be into it, but when we did the second set of older material, they went completely apeshit.

Hinds: "We used to back away from songs that were simple and more commercial: 'Naw, that's too simple, man. We've gotta complicate it.' Now, we have the attitude of 'If it's rocking, if it sounds good, let's do it.'"

Of the new songs you're playing live, which ones are surprising you the most?

Hinds: "Creature Lives. We just started doing it, and it's going over big. The people were singing along right away. They're singing the chorus before we can even get to it! Figure that one out." [laughs]

Kelliher: "I didn't expect that. Brann thought that would be the case, but I was like, 'Are we really that kind of band? A sing-along…I just don't hear it.' But he was right. So I guess we are a sing-along band." [laughs]

Do you ever swap parts? Something one guy played on a record the other guy plays live?

Hinds: "Yeah, absolutely. Even with some of the older material, I'll find different things to play. I know it all so well, so I have to go off exploring."

Kelliher: "What happens is, there might be a part that Brent played in the studio, but if it's real technical and too hard to play and sing over live, I'll play the hard part he originally did, and he'll play something easier so he can sing."

Hinds: "Take Quintessence from Crack The Skye: [imitates and air-guitars a riff] I cannot play that and sing at the same time. No way! So I told Bill, 'You have got to handle that one.' Mainly it's things like that."

Do the two of you feel as though you have a telepathy on stage?

Hinds: "Sure. I know everything Bill is going to do. We've done this so many times and played so many shows - he can't surprise me anymore. Hell, I know when he's going to walk into the room." [laughs]

Kelliher: "We've been doing this for 12 years, so we've got everything down to a science. We're not like a jam band. Everything is pretty regimented."

If one of you makes a mistake on stage, does the other person catch it?

Hinds: "It's all about recovering the ball. We've figured out how to get the ball out of the neighbor's yard while the dog is barking and gnashing its teeth. With a song like Capillarian Crest, you have to turn into a superhero to get that ball back. I don't know if we've made any mistakes on the newer stuff."

Kelliher: "We try not to make mistakes, but we're human, you know? But playing live is like walking down the stairs with an armful of china: you take one wrong step and everything's fucked."

Hinds: "That's one thing we did to ourselves by making some of the songs so hard to play. God, we really did that to ourselves, didn't we? Why did we write such hard songs?" [laughs]

Have there been any changes to your live rigs since you last went out?

Kelliher: "I tend to try new things and go right back to the same old pedals that I used 20 years ago. But I am using something new for me, this TC Electronic G-System controller. It's pretty cool, because now I don't have to dance around on stage and try to hit two or three pedals at a time; I can preset the configurations into the G-System and I'm good to go. That's been the big change."

Hinds: "I still like my Marshall JMPs. I can try every amp in the world, but nothing will affect me like the JMPs. Same with distortion pedals. I've tried everything you can think of. I've had distortion pedals custom designed for me. And still, I always go back to the Ibanez Tube Screamers. Those are the best."

How does the road affect the band in the ways that you interact with one another? Are you different people on tour as opposed to at home?

Hinds: "At home, we don't see each other so much because we spend so much time together on the road. We go our own ways."

Kelliher: "We try to take breaks from one another. It's funny, though: For me, being on tour is like being on vacation. When I'm at home, I'm trying to play catch up. I'm trying to get back with my kids, my wife, my dogs, my house, whatever. It's like, 'Man, I can't wait to go on tour so I can get some sleep!'" [laughs]

What was with you and that picture of Barney? [laughs all around]

Hinds: "We showed up the other day in Indianapolis, Indiana, and on the marquee of this venue it said 'Barney's Birthday Bash' and below that it said 'Mastodon.'"

Hinds: "Right out of Spinal Tap! [laughs] We didn't know it, but there were two venues inside this giant place. We played upstairs and Barney played downstairs. He was done by nine, and we went on at ten. All the Barney people - Baby Bop, all the folks in the show - they came on stage with us and sang Creature Lives. It was amazing. We hung out afterwards, drank beer and whiskey…"

Kelliher: "It was something else. You know, the people in the Barney show, they're just like us. They're in a tour bus, we're in a tour bus. They plauy gigs, we play gigs. When I saw Barney was in the house, I told our tour manager, 'We have got to get a picture with Barney And Friends.'

Hinds: "You can't get any cooler than Barney. He's a little dinosaur, man!"