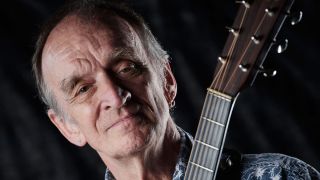 Martin Carthy is an ambassador for traditional music and a mine of information on the subject of the evolution of various folk styles.

In fact, fellow guitarist Martin Simpson - who, let's face it, is no slouch when it comes to performing a traditional song or two himself - told us candidly that a phone call to Mr Carthy always bears fruit, should one be in the process of researching a ballad from folk's illustrious and darkly populated yesteryear.

Possessed of a unique guitar style and his own signature Martin, Carthy has his audiences enthralled as he turns the clocks back to a time when mariners invariably meet a sticky end while their lovers wait ashore in vain; when villainous deeds are commonplace and heroism often springs from the most unlikely quarters.

But today, we're here to gather his musings and reminiscences from a career in music that spans nearly six decades...

1. Out of chaos comes riches

"My first instrument actually belonged to my dad. He had a guitar that sat, with not all the strings on it, in his room. He had  a room that was his room and it was the one room in the house that was complete chaos, but he knew where everything was.

2. Know who your friends are

"The first decent guitar I had, my mate Mike bought it for me. He had 10 quid  and I didn't. He was a film editor and he was making good money and he just said, 'There you are, there's a decent guitar.' And I immediately went out and I bought banjo strings for the top three strings, which, on a guitar, are super-duper light, but it made the right noise as far as I was concerned. If I had put standard steel strings on, it would probably have pulled the bridge off in no time. I loved it!"

"[With blues] it was the directness of the playing, it was just really exciting. It wasn't clean and sweet and beautiful, it was just full tilt and just going for it. Big Bill Broonzy was very simple, but it wasn't easy - it was the beginning of training your ears, which you have to do if you're going to do traditional music. You've got to train your ears and there weren't any kind of tutors and back then, there was no such thing as tablature, I'm glad to say.

"I'm quite antagonistic towards tablature, because it teaches people to do something exactly the same as you - and their ears are never trained."

4. Understand the origins of your music

"Blues and jazz are a folk music. If you really want to get it right, you've got to use your ears and trust them and train them and you'll be led up all sorts of blind alleys that way, but you'll have a great time going there and a great time coming back. It's very exciting.

"The first person I heard play the guitar properly - in a way that excited me, I'd been bitten by the folk-music bug, if you like - was the stuff Lonnie [Donegan] did, but the idea that this stuff had antecedents was a worm in my soul and after that,  I wanted to know."

5. Go deep with your research

"It was very hard to get your hands on recordings because they were locked away in places like Cecil Sharp House. There were radio programmes like As I Roved Out and there was an Alan Lomax series on the Third Programme [the old title for Radio Three]; we all called it 'The Ballad Hunter Series' and there was some astounding  stuff on that.

"I can remember hearing a programme about the Georgia Sea Islands. All the people who lived there were former slaves and the music that came out of there was just astonishing. One that always stuck in my mind was called The Turtle Dove Done Drooped His Wings, which is an English traditional song, but it had been taken apart and reimagined by these descendants of former slaves."

6. Look hard at a song's origins

"It was actually finding that all these songs have a history and that's what always, always double intrigued me and, being  an English person, I wanted to find out  who these ancestors of Turtle Dove Done Drooped His Wings were. I wanted to find out what that was and I was astonished sometimes, horrified sometimes; nowadays, I would be utterly delighted all the time to find what they were, but it was all part of that worm that had got into my soul."

7. Be open-minded to new techniques...

"There's a way of playing, it's a right hand technique that you find in The Appalachians and that you find in West Africa. It's not that very fast fingerpicking style, it's another way. They call it 'frailing' or 'knock down' or 'claw-hammer'. It's a beautiful style.

"When you watch someone doing it, you think that it's one of those things that somebody invented or that successive generations developed and when I watch someone doing that, and doing it well, what I see seems to bear no resemblance, no relation at all, to the noise that's emerging!"

"A guy called Hassan Hakmoun from  West Africa - I think he's from Morocco/ Mauritania, that sort of area - I watched him play and, I mean, this guy is fabulously skilful and very showbiz. He's playing spinning on one leg and singing as well. When he gets round to the microphone,  he spins on one leg as he plays. What the fuck is that? Just extraordinary. Then  I was watching his right hand and was thinking, 'This guy's frailing...' It's a fantastic connection that happens and it's what those slaves brought over."

"There were a lot of tunings that I simply can't remember now, because I decided  at one point that I was spending so much bloody time tuning and there was so much wear and tear on the strings that what I should do was decide on one tuning and then just work a bit harder to make everything work.

"So, my standard tuning these days is, from the bass, CGCDGA. Theoretically, you can play in any key, but you can play in C, D, Em, F, G and Bb. With a bit more effort, I can play in Eb and I can sort of play accompaniment in A and Bm."

"There is another tuning I use - DGCGCD - and I use that for Prince Heathen and Famous Flower Of Serving Men and stuff like that. With DGCGCD, you find yourself playing the melodies in octaves. And then there's one or two when I do cheat and put the capo on...

"Neither of these two do I use for more two songs each: one of them is DGDGGD, that's bottom to top, and the other one is DGDDGD. That's one I use for one song called Bill Norrie and that's DGBDGB. It's very effective, especially because it's an odd tune."

11. Map out the territory

"I like the fact that it's melodic and those funny tunings like CGCDGA actually enable you to play melodically. There's a tremendous resonance about that tuning; it resonates much more than in standard tuning and that's all those 4ths and 5ths - and the harmonics you start setting off."

12. Sometimes zero is a hero

"I got my original Martin in '63, it had belonged to Alexis Korner. I was on tour with Dave Swarbrick and we were in the Manchester/Liverpool area and this guitar builder called Stan Francis, who made Pete Seeger's 12-string, came to a gig and introduced himself. I said, 'I don't suppose you could do a refret job, could you?'

""He said, 'I've just made a guitar, it's a copy of a D-18. You take that one and I'll bring yours to your gig next week.' The following week he turned up and he'd put a zero fret in. The response was just astonishing - I've had a zero fret ever since."