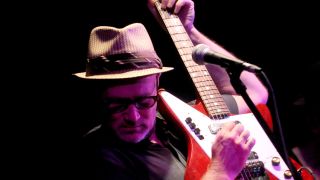 "It's mind-blowing the things I hear sometimes," says singer-songwriter and guitarist Marshall Crenshaw. "I'll get comments from people like, 'My wife and I conceived our kid to one of your records,' or 'My husband and I met while one of your songs was playing.' The power that music has in people's lives - I never get tired of that. It's incredible."

During his 30-year-career, Crenshaw's smooth, buttery vocals and formidable guitar chops have earned him a loyal audience. He's scored hits such as Someday, Someway (also covered by Robert Gordon) and has co-written smashes like the Gin Blossoms' Till I Hear It From You. He even earned a Golden Globe nomination for writing the title track to the movie Walk Hard: The Dewey Cox Story.

Recently, Crenshaw embarked on a curious and ambitious ongoing project by which he'll issue a series of three-song EPs on both vinyl and digital formats through his website. The first release features the immensely satisfying I Don't See You Laughing Now, an intriguing cover of The Move's No Time and a live version of Crenshaw's classic There She Goes Again.

Crenshaw sat down with MusicRadar the other day to talk about a number of topics, among them his new marketing system, his longtime love of Stratocasters, the art of writing riffs and how he felt portraying Buddy Holly in the movie La Bamba.

I was talking to producer Steve Lillywhite last year. One of the things we discussed was your album Field Day. I love the record, but he seemed concerned about its legacy, how your fans didn't like the radical change in sound from your debut.

[Laughs] "It's funny you should mention that. I finally tracked Steve down and got on his ass about that in a friendly way. He's a great guy. We had lunch and had a really nice time. But I did want to talk to him about the record and remind him that there wasn't a single thing on it that didn't meet with my approval. If there was anything about that record that I didn't like, believe me, it would've been changed.

"I love Field Day. Everything about it that people threw their arms up about - the noisiness and what have you - if anything, I was pushing Steve too far in that direction, you know? Like it was my mistake that the vocals were buried - I kept insisting that they be pulled into the track. That was me, not him.

"And I fought for that record, too. My A&R person at the time was this lady named Karen Berg, and I really dug her. She got what it was about and what I was trying for. There were people at Warners in Burbank that didn't understand it at all. I just basically just said, 'They can say whatever they want, but I'm not changing anything.' And that was really stupid of me, but none of that was Steve's fault."

Crenshaw with his gold '65 Fender Stratocaster.

If anything, I think the record might have been ahead of its time.

"I do, too. It's a really cool record. You know, maybe I went a little too far. With me, it might have been a reaction, you know, the pendulum swinging a little too far as a response to my first album. But I'm happy with it. I wanted to make the record that was reflective of my tastes, and that's what I did."

Fantastic drumming on the album, too.

"Yeah, well, Steve had a lot of input in that. There's that big fill in the middle of the last chorus of Whenever You're On My Mind, and that was his idea. The drums are big."

The way you're starting to release music now, it sort of reminds me of the Book Of The Month Club.

[Laughs] "Yeah, yeah. You're right. What happened was, I had a bit of a struggle with my last album. The writing took me a long time, just 'cause I was kind of groping around. Plus, the record company situation was horrible. All of the above made me want to be done with the whole process and bring that part of my life to an end. But I still feel compelled to make recordings and to try to bring them to the people who want to hear them, so this was the approach.

"I love it. I love the way it's taken shape so far. You know, I'm a singles guy. Even though I've made albums, I kind of did them 'cause that's what you do. So this appeals to me in so many ways."

Making singles is all the rage with pop stars these days, but to me, it's no different from what bands were doing in the '60s.

"Absolutely. You're right, that's it. I'm not trying to emulate the '60s, but putting out singles and EPs is cool. That was the practice for people back then. For me, though, these aren't the singles between the albums. There isn't going to be an album. This is it."

Does working like this allow you to give more care to each song? You don't have to rush through a bunch of tracks to meet a deadline…

"Maybe. What I like about this is, it allows each song to be current. Like I said, it took me many years to get all the tunes together for my last album, Jaggedland. By the time the record came out, some of the stuff was five and six years old, which seems kind of crazy. So this is the opposite end of the spectrum."

From the sounds of it, songwriting for you is a hard process. Has it always been that way?

"The process of it, for me, is the same as it's always been. I'm different in that I'm not a young person anymore; I'm almost 60 now. I've gone through a whole life's worth of experiences, so I'm different in so many ways. But the process remains the same. I start with a beat and try to create a piece of music that moves me, and then I write the words. It's always the music first."

You've always had a way with riffs. They're catchy, fresh yet familiar - they spill right out and don't feel too fussed over.

"Hey, that's cool. I honestly don't know why I can do what I do. I just open up this part of myself and the stuff comes out. I have an instinct when it's right. At the same time, I don't know how it works. Sometimes I get an initial idea, and I have to craft it a little bit. But it's important to stay out of the way, too. You can wreck a good riff if you work on it too much. Again, I don't know how I do it, really. I'm just glad that I can." [Laughs]

You've amassed a lot of guitars during your career, but have any become real go-to models over the last few years?

"For this record, it was a red Fender Stratocaster. I love Stratocasters, and I love Fender guitars - I'm just attracted to them for some reason. I got this one back in 2002 from the Custom Shop. I got my first Stratocaster in 1972. It was one I bought from my cousin Chuck. He brought it back home from Southeast Asia - he was in the Air Force during the Vietnam War.

"I had the guitar for a long time. At the point when I did my first album, I'd had it refinished a couple of times - it was cherry red. I put this ESP neck on it that was shaped like a '55 Strat. It was made out of this exotic hardwood. The guitar started out as a '66 sunburst Strat, but it changed a lot over the years. At some point, I decided to restore it to what it had been when I got it from my cousin, but then I missed the way it was, so I got Fender to make me an approximation of that version of my first Stratocaster.

"I play that guitar a lot. It took me a while to break it in. I brought it with me on a tour I did with the surviving members of the MC5. I played guitar with them back in 2004. By the time I got home, that Stratocaster was nice and broken in and felt like a part of me. It's got a glassy, ringing sound. You hear it on the record, on the live version of There She Goes Again, and I also used it for the rhythm guitar on I Don't See You Laughing Now."

Crenshaw on stage in 1986 with his cherry red 1972 Strat. © Fabio Nosotti/CORBIS

I was going to bring that track up. Everything that's great about your signature guitar sound - that beautiful bell-like tone - is right there.

"Thanks. The basic guitar on that is the red Strat, and I put it through an amp that I don't have anymore - a Vox AC15, one of the 50th anniversary reissues. It was a really great amp, but I just felt like it was time to move on. The beautiful Vox sound, that's what it is. A lot of great amps are patterned after AC30s now - it's a pretty common thing."

What's the story with covering the song No Time? Growing up, were you a big fan of The Move?

"Yeah, I was. I think it's pretty cool, you know? I figure it's a timely piece. The way I take it, it's a song about the end of the world. But I always loved it and had a sense of awe about the song."

What kind of acoustic do you use on that?

"That's a Dana Bourgeois acoustic - a dreadnought with a sloped cutaway. I've had that guitar for about 15 years. The only two acoustics I own are both by Dana Bourgeois. I have a parlor size and the dreadnought. Both have such a beautiful sound."

What was it like playing Buddy Holly in La Bamba? I have to think there was a little pressure on your shoulders portraying one of your idols.

"I didn't think about that too much. It was a completely brand-new situation for me - I had no real acting experience before then. Even though I had been in Beatlemania, that was kind of fake acting. For La Bamba, I sort of felt inspired while doing it. Like that bit at the end, where I slap Richie with my gloves or whatever, that was spontaneous. I didn't know I could improvise like that."

Even though you were only in a couple of scenes, did you reference what Gary Busey had done in The Buddy Holly Story?

"No, but he did an amazing job. He's a real actor - I'm not. Well, I'm not sure what he is now [laughs]. But it was weird, because when we played the premiere party, he was actually sitting in front of me, like, a few rows back. He was kind of looking at me, and I was thinking, Wow, this is amazing - Gary Busey!

"But no, there's no comparison between what I did and his work in The Buddy Holly Story. Having said that, I felt good about what I did. It was interesting to take part in that - great fun."