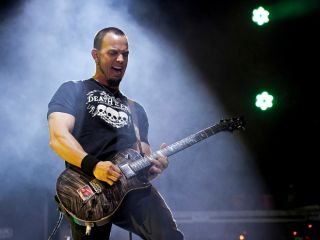 We brought you a three-track preview of Mark Tremonti's debut solo album on Monday, but now the Creed/Alter Bridge guitarist has revealed the collection, titled All I Was, is set for release on 10 July (likely to 9 July in the UK/Europe).

For the purposes of his solo work, the Alter Bridge man will apparently operate under the 'Tremonti' moniker.

The album was produced by Michael 'Elvis' Baskette (who has previously worked on Alter Bridge's ABIII and Blackbird, as well as the likes of Limp Bizkit, Cold and Trivium) and also marks the guitarist's debut as a lead singer.

In addition, the guitarist will be taking the album on tour later this year with Eric Friedman (Staind, Creed tour player) on rhythm guitar duties, Brian Marshall (Alter Bridge) on bass and Garrett Whitlock on drums.

No word on specific tour dates yet, or whether Tremonti will be bringing the show to Europe, but we have got a full tracklist and cover art, which you can check out below.

Mark Tremonti All I Was tracklist