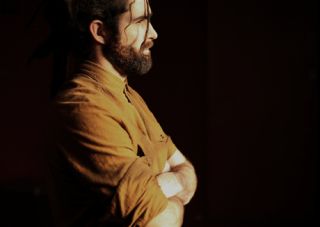 ACOUSTIC EXPO 2013: Growing up on the island of Jersey, Lloyd Yates discovered his passion for music while listening to the likes of Nirvana and Lenny Kravitz. Marry that with the picturesque north coast scenery of his home country and Yates' recipe for songwriting inspiration was written.

A quiet man and keen surfer who surrounds himself with family and nature, when it comes to playing Yates is a self-taught guitarist who goes on soul and feeling rather than learning theory for theory's sake. Playing since he was 15 and having travelled the world to explore land and life beyond thosee deep waters surrounding his home, it's safe to say Yates has plenty in the songwriting vault to draw upon.

That's never more evident on his new roots and folk rock tinted EP Bring Back The Life. The title track on its own was enough to send national radio stations into a tizz, garnering major airplay for Yates, while this summer has seen him snapped up by festivals and one-off shows alike.

We recently caught up with him to discuss his new EP, and to get some tips for those of you planning on writing your own.

You've received a lot of acclaim for your songwriting, so how would you describe your approach?

"Well, I don't pressure myself. I have a good relationship with my songwriting and I don't force it. It's about passion and certain moments; moments of being extremely sensitive of my surroundings and to really be looking into what's going on. Songs pretty much just come to me. Sometimes I pick up the guitar and the words - the lot - comes all in one take. Those are my special times."

But what exactly goes into a Lloyd Yates original?

"Normally I think about what's going on at the time for me and sometimes it's not always that obvious. I guess sometimes the best way is to sit down with my guitar and just see what comes out of my mouth. I record absolutely everything that I do. I listen back, put it down on paper and normally it makes senses and answers questions that I have been confused about. I don't want to sing about something everyone else is singing about. I want to sing about something that can really help people and help me in the process."

How did growing up on an island influence your writing style?

"Each time you look out from the north coast of Jersey you're looking for something that's 'out there', so I like that. I like writing about big landscapes and allowing the music you write to try and replicate how something can make you feel. It's inspired my music, you know? With so much sea around you, there's always something beautiful to look at."

Bring Back The Life is a stunning, soulful EP. How much prep did you do before entering the studio to record it?

"The EP was actually dotted around: a little at EMI and we did some sessions up on the north coast of Jersey in this Scout Hall, so it was really pulled apart in certain places. I don't like the idea of walking in with polished things. There's so much to achieve by actually feeling you are recording your own album. You have to take advantage of it and make sure you use something organic."

You have a very unique vocal. Did you have to adapt in the studio and explore different mics until you found the right sound?

"We explored a few microphones, yeah. It was all about the room at the end of the day. Every room we used a different mic, and my producer Jason Boshoff is so hands-on - he works harder than anyone. He'd bring a new mic in everyday and I had never done that sort of thing before. It was definitely a lot of experimental work, figuring out what worked for us."

How did you approach the guitars on the EP?

"Again, we did so much guitar experimental work. It was phenomenal really and a lot of the stuff we were doing the producer hadn't even done before, so it really felt like we had created this sound that was ours and nobody else's. Jason was an absolute genius and there was no end to the effort that went into finding the guitar sound."

Did you use any other instruments?

"What we will do is write a song and ask, 'What will it need?' We've got a bit of banjo in Down By The River, which is done by John Smith who is an amazing artist."

The cost of recording can be a big issue for most bands in this climate so how did you get around it? Were you signed at the time?

"Yeah, I was signed [as a songwriter] to EMI [publishing] so they helped us out quite a lot. The first session we had was done with people enjoying the environment and enjoying what we were up to. People were just going in and doing it for us, just on a whim because they believed in us, then we got a bit of money and that pushed us through. Then, you know, the money runs out. But we just kept plugging forward and pushing hard."

For readers looking to release their own EP, what advice can you give?

"Have ideas and visions and believe you're going to get people involved even if you have no money. Besides, you'll find the money. Look at where you want to be, find out who you want to be working with and don't stop until you get it. Don't believe you need big record companies to come and pat you on the shoulders because it doesn't have to work that way. We pretty much moved it to London eight months ago and we've achieved a lot. Come to London, come to somewhere you're going to bump into people all the time. And make sure you're tight and then you will smash the shit out of it!"

Lloyd Yates' new EP, Bring Back The Life, is out now on Stoked Music.