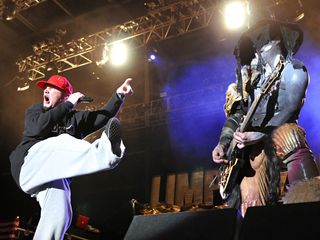 Durst and what could be guitarist Wes Borland on stage in Ohio (Image credit: Amy Harris/Corbis)

Just when you thought it was safe to put that red baseball cap in the closet for good, Limp Bizkit are threatening to do it for the nookie all over again, just like it was 1999. That's right, the Fred Durst-fronted rap-metal outfit are indicating that their long-delayed fifth album, Gold Cobra, as well as another disc of all-new material, could be released soon.

In 2009, Durst was making noise about Gold Cobra, stating that the album would feature 10 songs and that the band wanted to release a single called Douchebag. He claimed that his record label was opposed to the song as a single but said that the band would find a way to release it anyway.

In 2010, neither Gold Cobra nor Douchebag had been issued. Durst posted a song called Why Try on the band's website and then followed it up with another track, Walking Away (see above video).

Now that it's 2011, Durst and co appear to be ready to make up for lost time. Last month, the frontman wrote on the band's website: "Through thick and thin, the Gold Cobra has slivered its way through the corporate jungle and into the studio to be mixed by Dave Schiffman. My intentions are to keep as much 'polish' off of this album as possible... We are extremely excited to get this album into your eardrums. As some of you have noticed, we have and will take as much time as we need before putting this album out regardless of any pressure or impatience that is thrown our way. So, waste your breath if you like. It's your prerogative.-fd"

This past Monday, 14 March, Durst Tweeted, "Obviously we have two albums here, in case you didn't pick up on that. First one is 'Gold Cobra.' Due soon." He then followed it up with "Oh, excuse me, sixteenth song mixed is 'Ready To Go' featuring Lil Wayne. GFY! I love it."

So there you go. Just in case you were wondering...