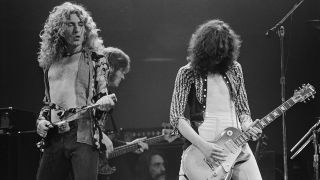 Led Zeppelin's Whole Lotta Love has been voted the greatest guitar riff of all time by BBC Radio 2 listeners.

Jimmy Page's riff topped a list of 100 that was dominated by rock, with Guns 'N' Roses' Sweet Child O' Mine, AC/DC's Back In Black and Deep Purple ubiquitous Smoke On The Water following close behind the 1969 classic.

Zeppelin guitarist Jimmy Page said he was "knocked out" by the result.

"I wanted a riff that really moved," he told the BBC, "that people would really get, and would bring a smile to their faces, but when I played it with the band, it really went into overdrive.

"There was this intent to have this riff and the movement of it, so it was menacing as well as quite sort of caressing."

The greatest riff list was compiled from a selection curated by Radio 2's presenters with various music critics and record producers. Each act could only appear once (though some guitarists like Ritchie Blackmore were eligible via playing in two bands that made the list).

Once assembled, listeners could vote for their favourites, with the full 100 being played on Radio 2 on Monday, August 25.

Here's the top ten riffs of all time, as voted by Radio 2 listeners:

4. Smoke On The Water - Deep Purple

5. Layla - Derek and The Dominoes

8. Money For Nothing - Dire Straits

The next issue of Total Guitar magazine - out next week - will take a closer look at the top 100 choices (and some are controversial) plus, they'll show you how to play 20 of them too.