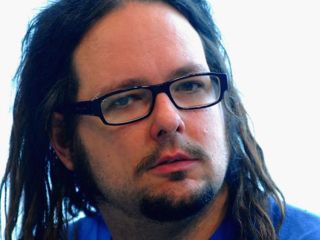 Only a day after ex-Korn guitarist Brian 'Head' Welch posted a new solo track of his own, Korn frontman Jonathan Davis has been talking more about his own forthcoming solo project. And it's going to be very different from what you might expect from the Korn growler.

"I always compare it to when Steve Perry went and did (solo hit) Oh Sherrie, which is a fucking Journey song," he says. "It sounded exactly like Journey, and that's fucked up. I don't want to do that."

"I feel like I'm waving the flag for musicianship, trying to bring back bands that can play. It seems like a lot of music today is so churned out and simple."

The result? Davis has assembled a new band called the Simply Fuckin' Amazings, and is incorporating violin, didgeridoo, the glass armonica (an instrument designed by US politican/author Benjamin Franklin in 1761, no less), the duduk (an Armenian wind instrument) and the biwa (a Japanese lute) into the songs.

"It sounds like a banjo, but they sing with it, and it's the most fucking passionate, emotional music I've ever heard in my life," says Davis. "I want to include that in my album, because it's so passionate. Like when you hear a Korn song and it's really going crazy, these guys do it with a stringy banjo. I want to bring that to kids here who are like, 'What the fuck is this?' and open their minds up to something different."

Davis is already known for playing bagpipes, of course, but this sounds like something very different. The album is due in November, and you can hear work in progress on Davis's Myspace page.