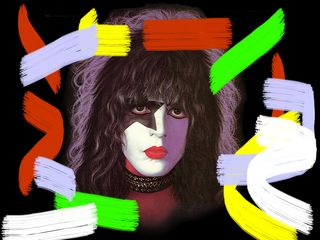 Kiss's Paul Stanley is an artist

MusicRadar is impressed to hear that Kiss's Paul Stanley will be exhibiting his paintings, from 27 February, at Wentworth Gallery, Hackensack, New Jersey.

MusicRadar is more amazed to learn that, in 2007, Stanley earned $2 million from his artwork. His originals fetch as much as $70,000, with limited-edition prints going to $1,000.

Maybe this shouldn't be a surprise? After all, Paul Stanley has had a lifetime's practice of painting a big black star over his right eye. And that takes talent.

Music and the visual arts have always been comfy bedfellows. Art schools have long been fertile breeding grounds for great bands.

Although Kiss, it should be noted, did not go to art school.

Anyway, on with the exhibitionists!

Here's the work of Paul Stanley and 13 other musos who mix picks with palettes. These aren't just amateurs; all these musicians have had their paintings exhibited in 'proper' art galleries.

Stanley started painting as a 'release' from getting over a painful divorce. He says, "The only thing that I was clear on from the get-go was that I wasn't interested in making a flower pot look like a flower pot." Damn right, this is no flower pot.

Arguments still rage over who was really the 'arty' one in The Beatles. John Lennon did plenty of sketches. Paul McCartney does 'proper' paintings. "I have always enjoyed drawing, often cartoon faces," muses Macca. "I like the line, not necessarily the content. I like quick lines, very spontaneous lines. I like the circle, a couple of eyes, a mouth, and just characters in the faces, so I have done that quite a bit." Fab - this certainly looks 'spontaneous'.

Queen of filigree folk Joni Mitchell reckons she was never a 'proper' singer or guitar player, it seems. "I'm really a painter at heart and I can say this now... Music was a hobby for me at art school, and art was serious. Art was always what I was going to do. I was going to be an artist." And, indeed, she is.

A collage of Joni Mitchell's work

The drummer has spent his stage-life staring at Jon Bon Jovi's arse, yet finds a more beautiful muse with his paintbrushes. Cue weak gag: "Shot to the art / and you're to blame…"

Tico Torres - The Sound Of Music

When Don Van Vliet 'retired' his Captain Beefheart persona, he gave up impenetrable music to concentrate on impenetrable painting. Says Robert Williams, former Magic Band drummer: "Don's Art is spectacular. It reminds me of a drunk on a high wire who miraculously makes it to the other side each time, but not without the tension." Hang on, don't drunks on high wires fall off and die?

The US singer-songwriter has exhibited his works across the US. Like his music, his visual works are often political. "I'm not an artist," Mellencamp says. "I'm just a guy with a lot of tenacity. I have the ability to not quit. Most people quit on everything too soon. Most people simply don't have the ability to get things done, and that's the difference between me and most people. I don't quit." Not matter what you think, he's not QUITTING. Ok?

Since the demise of The Stone Roses and The Seahorses, guitarist Squire has concentrated on painting. His style is diverse, to say the least, though Squire insists: "guitar was a struggle, I never understood the process like I do the art process." Oookay. Judge, if you will, I Am the Resurrection vs this painting, Northern Landscape.

In 2003 Rolling Stones guitarist Ron Wood's painting Stones In Sepia sold for $200,000 to an anonymous collector at Masters Gallery in Denver. This was "not only a record sale for himself, but we are quite sure for the category of celebrity art," said the Masters Gallery. Art collector Mick Jagger once tried to buy one of Wood's paintings. "I think the price might have scared him away a bit," said Wood. "It was £70,000 or something." See, Mick Jagger IS the smart one in The Stones.

Another London art school graduate, Simonon named The Clash and was mainly responsible for the visual aspects such as clothing and stage backdrops. Has recently returned to the bass with The Good The Bad And The Queen, but back in 2002 he said: "To be honest I've got to the stage now where I just want to paint - I've done my time with the music."

Dylan's paintings went on public display for the first time in 2007, at the small German town of Chemnitz. Dylan's paintings were produced between 1989-92. "If not for this interest, I don't know if I even would have revisited them," he admitted. And nor would we.

The original leading light of Pink Floyd, Roger 'Syd' Barrett was always an artist at heart. As with his songs about knicker-stealing transvestites and bikes, Barrett's art is best-described as 'whimsical'. This dark creation is called Carnival. Happy days!

Blur's guitarist went to art school and is a clever man. Of his paintings he says: "when I look at my visual work it's easy for me to see their creator as a confused, inconsistent hobbyist or, at worst, a painter and decorator who owns a few art books." Coxon also asks, sagely: "the musician hates the soapstar when he sings, does the artist hate the musician when he paints?" No idea. We'd have to find an artist first…

Beware the self-styled God Of Fuck when he picks up a paintbrush. "I wasn't intending for any of these pieces to be for anybody but myself or the friends that I did portraits of and would give as gifts," he says. A gift? Have yourselves a Merry Christmas with Marilyn's presents, won't you…

Let us know what you think of the artists' art.