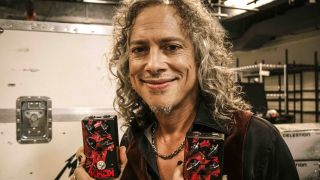 KHDK Electronics, the brainchild of Kirk Hammett and David Karon, has unveiled the latest addition to its pedal range: the Dark Blood distortion pedal.

Promising a "distinctly amp-like" drive, with a mid-heavy tone and extra-high gain, the Dark Blood offers a Doom control to adjust pre-distortion EQ, plus a built-in noise gate.

As well as combining solid-state and MOSFET tech, the Dark Blood also packs a treble booster to "push the guitar tone to the limit", courtesy of a canny design from engineer Antonin Salva.

Kirk revealed to Total Guitar that the pedal appeared heavily across the new Metallica album, Hardwired… To Self-Destruct, and its origins lie in an obscure European pedal…

"It's based on this one pedal I found in Europe," Kirk says. "It's weird, this pedal showed up, I bought it and I never saw another one ever again. I think they only made it for like six months or something.

"So I brought this pedal to Dave [Karon, Kirk's business partner in KHDK] and said, 'Dave, we need to break open this pedal and improve on it.'

"As a result, I have to say, as a lead guitar player, if you plug into that pedal it would be hard for you not to just want to instantly rip. It's one of those pedals that if you plug into it, it just demands that you start playing a guitar solo.

Kirk is referring to the Ghoul Screamer, No 1 Overdrive and No 2 Boost, which he and David discuss at length in our in-depth interview.

For more Metallica and guitar talk from Kirk and James Hetfield, check out Total Guitar issue 287, on sale 18 November.