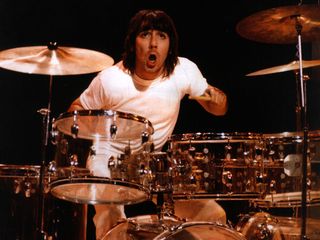 Who drummer Keith Moon has been rejected by English Heritage

English Heritage installs an official ‘blue plaque´ on London buildings where great figures have lived. Despite lobbying by Who fans, drummer Keith Moon won´t be getting one for at least a decade.

The decision hasn´t impressed Keith Moon´s fans. Editor of Record Collector magazine Alan Lewis told The Independent newspaper: "English Heritage's argument that we need to wait another 10 years to assess Moon's worth is spurious. It is 40 years since his finest hours. How much more time do they need? They are also inconsistent - a plaque to Hendrix was unveiled several years ago."

The ex-home of Marc Bolan was also rejected, as was No 3 Savile Row, where The Beatles performed live for the last time on the rooftop of the Apple studios. Jimi Hendrix, a part-Cherokee African American, remains the only rock-era musician whose London home has been awarded an English Heritage blue plaque. Here´s a Jimi Hendrix video interview in his Brook Street home. You can also buy an English Heritage officially-licensed blue plaque Jimi Hendrix tea towel - just what he would have wanted, of course.

What do you think of this ‘heritage´ plaque scheme?