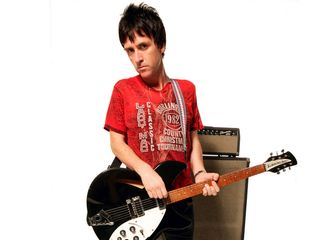 Marr originally agreed to play on a few tracks of The Cribs' forthcoming album, but he's now agreed to be their guitarist full-time .

Marr told BBC's 6music radio station: "It's totally inspiring as a guitar player because they're my favourite band that I've heard in a long time and I'm still a fan, you know. I think it's important to nurture that, and think like a fan, and it's not always easy to think like a fan - you have to really genuinely like the band.

"When I got into The Cribs' second record, I was just really excited because they were a band that I could be a fan of, and I get to be in a band that I'm a real fan of, so that's fantastic just from a musical point of view".

He continued: "What we've done so far, people who've heard it say it sounds very much like The Smiths mashed with The Cribs and that's obviously quite an exciting prospect for some people but it's not really enough for us that. We want it to be the next version of The Cribs. One of the things I liked about the band before I even met them was that they sounded like achievers really, almost like over-achievers. I just heard one track and hoped that everything else was as good as that".

With Marr still clearly enjoying band-hopping at the age of 44, any chance of a Smiths reunion seems further away than ever. Marr hasn't made it clear whether he'll still work with Modest Mouse or complete his in-progress second solo album. In the '90s, he was simultaneously a 'full-time' member of Electronic and The The.

He'd probably join your band if you asked nicely.