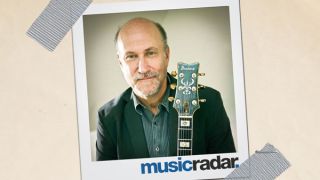 The formidable New York fusion pioneer talks powercuts, copycats and big, fat jazz guitars - as he stays Up All Night to answer the 10 questions we ask everyone...

"When I was 11, I had an acoustic that my parents rented from a music store. Then, in 1964, I got my first electric, which was a Hagstrom that looked sort of like a Strat.

"It was a strange sky blue Swedish guitar, and it had a kind of plastic top, but it was cheap and looked like a Fender. I don't have it now. All through the 60s, into the 70s, I'd trade one guitar in for the next, like a car."

The building's burning down: what guitar from your collection would you save?

"I've got 30-plus guitars - too many. I have a 60s Gibson Howard Roberts, a big, fat jazz guitar, and I should probably save that, but I really like my old Ibanez AS200 from 1982. This is stupid, but if I had to choose one, it would be my workhorse Ibanez."

What's the oldest guitar you have?

What aspect of playing guitar Would you like to be better at?

"I'm certainly not perfect. Playing the guitar is a battle to try and tame the beast. I'm a little bit klutzy, so guitar is something I have to work on. I would like to be better at all aspects. But I'd really like to be able to play what I hear - and I can't always do that."

What's the worst thing that's ever happened to you on stage?

"I've had so many mishaps that I'm expecting them at this point. From small mishaps, where the sound is funny, to extreme mishaps where the band starts playing a different song to you, or the lights go out.

"I'm 63, and I've been doing this my whole life. I've had fried amps. I've had loss of power a bunch of times, especially in Eastern Europe and South America."

What song would you play on acoustic round the campfire?

"Probably some sort of I-IV-V thing, or a slow blues. Do I have a favourite blues tune? No - because they're all kind of the same!"

What advice would you give your younger self about guitar?

"Stay true to the music you love - but play everything. Listen to the masters, and copy them - and it won't hurt you, because you're gonna sound like yourself no matter what you do.

"Also, learn songs by singers and by instruments other than yourself. Because then you can copy their stuff, and it'll come out differently... and nobody will know!"

When was the last time you practised, and what did you play?

"Just before you called. I'm gonna do this tour with a great singer and piano player named Jon Cleary. So I was working on an old R&B song - It's Just A Matter Of Time, by Brook Benton."

What are you doing five minutes before you go onstage?

"Playing a chromatic scale, to get my fingers working. Is it serious backstage? No, I'm just doing that while I'm talking to people. Music sounds best when it's relaxed."

And what about five minutes after?

"I'm looking for people to tell me I sounded good. I'm putting my guitar in my case, and heading back to the hotel. The road is so tough that I get out of there pretty quick. It used to be that I was up all night, but not anymore."

Gov't Mule & John Scofield's Sco-Mule is out now on Mascot/Provogue.