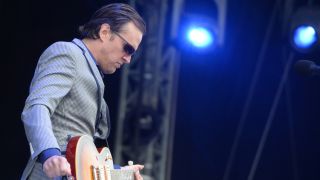 Guitar star Joe Bonamassa is giving fans a preview of what they can expect on his upcoming album, Different Shades Of Blue, with the release of a music video to the plaintive yet fiery title track.

Different Shades Of Blue is Bonamassa's first studio release in over two years, and it's also his first-ever disc of all-original material. The guitarist/singer-songwriter traveled to Nashville four times last year to work on material with some of the city's notable tunesmiths.

"I wanted to make a blues album of all-original material, and I needed lyrics, song structures," Bonamassa told MusicRadar earlier this year. "I wanted to work with some of the guys who write choruses - real songwriters. I got in with a bunch of different people, and the results were pretty great."

You can pre-order Different Shades Of Blue (release date September 23) at this link.