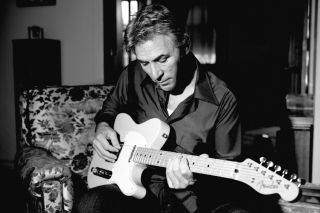 Jim Campilongo is one of the most creative, Tele-twisting guitarists in the world, seamlessly melding jazz, early country and blues together in his playing which takes its inspiration from everyone from Chet Atkins to Hendrix, but remains totally unique.

Jim's got several acclaimed solo albums under his belt, including his most recent, the critically-praised Dream Dictionary, and he's also a regular collaborator with world-class artists such as Norah Jones.

Fender recently honoured Jim with his own signature-model Telecaster, which takes his main-squeeze '59 Telecaster as a tonal reference point, but adds several unique features to enhance playability.

We caught up with him to ask how his signature Tele has been modded to accommodate his highly creative playing style and how he sets up his Fender Princeton combos to achieve his trademark warm-yet-lacerating tone.

What's special about your signature-model Tele?

"I was totally wired that they made a Jim Campilongo Telecaster - I still can't believe it when I see my name on the back of it. I was totally honoured they made it. They were 50 made of the blonde finish version of my Custom Shop Tele. Tonally the signature model is not a great departure from my '59, but it's actually easier to play because the neck of my '59 is almost scalloped from fretboard wear. There's no obstructions on the new ones. It's a nice neck you can kind of dominate and the guitar is actually very light, too. We went through dozens of pickups and although Fender always sent us really good pickups, I was really particular in wanting something really woody sounding, really bassy sounding. On the neck it's a nice jazz sound, for a Tele. One of the other features is that it's really flat on the back of the neck [where it meets the headstock] to make sliding up to do behind-the-nut bends easier.

"But the most major feature is the modified bridge. Most Tele bridges have a 'soap-dish' type lip round the edge of the bridge and I would always hit that with my pick and it would really annoy me! It's hard enough to play guitar without having this metal thing keeping you from picking your strings [laughs]. Because I pick way back next to the bridge a lot of the time: it gives you a much different sound. So I'd pick there and inevitably I'd hit that plate. So one of the first things I asked was, could we remove that lip? And they were really, really cool about it. I was a little worried actually that in some way I'd miss it -that I might be using it to rest my fingers on without realising it. But that's not the case. It's great.

"Finally it's got the top-hat switch tip on the pickup selector. I find switching between pickups quickly is problematic with those short little switch tips. So we used a 60s model that you can grab easily when [the pickup selector is in the bridge position]. The smaller switch-tips kind of hide behind the volume knob. And I find the top-hat type just makes more sense to me. So that's my Custom guitar!"

You're also a big fan of Fender's Princeton amp. How do you set them up to get your tone?

"I usually keep my treble on about 8 to eight-and-a-half.To this day nobody plays the Telecaster and says 'I wish there was more treble', so usually I bring that down.Bass is always on 10.The pickups in my '59 have a bassy sound and, as I say, that was one of the real challenges with developing my Custom: we went through dozens of pickups. So I always keep the bass on my amp on 10. I've had amp-repair guys just wince about that, and I never know why - I think it makes total sense. I really like reverb, so that might be on about 4. I also use the Princeton's tremolo and just keep it switched on, so I can just reach over [and dial it in if I need to]. But when I do use tremolo, I take my reverb off."

What three records did you find most inspirational tone-wise, and in terms of playing, when you were growing up?

"That's tough. I would say, East-West by the Paul Butterfield Blues Band, for sure. Wheels of Fire, by Cream - I used to call them 'The Cream' [laughs]. Third one's going to be really tough; just because there are so many. I could certainly say those two. Just give me a second because I'm debating over a couple more. I could say Django Reinhardt to be kind of cool - but I'm not trying to be cool, I'm just trying to be honest. I really like John McLaughlin's Devotion at lot...Oh, and I didn't say Roy Buchanan's first record. So you know, definitely East-West, and I don't mention it enough. Really the first LP I ever bought was Jimi Hendrix's Greatest Hits. I wore that out. I mean if I could get a fourth choice I would say Electric Ladyland.

"I also have to put in Derek and the Dominoes. The live version of Let It Rain is really why I play guitar. I couldn't stop listening to that. To this day I think it's still a really amazing solo. I've played it for people and they find it like cliché ridden. I say, 'Yes, but he defined those clichés. They became clichés because he was playing them in a lot of ways.' It's such a fast solo. It's not fast in the way Allan Holdsworth is, or someone like that. It's fast in the way he's thinking. He has great ideas; every four bars or something. It's really an amazing solo - it's super long, it's 17 minutes and 14 seconds long if my memory serves me correct.

"I remember I'd listen to it and then just put it on again. At any rate before the drum solo, the solo is just a masterpiece. Then a few years ago - and they just do these things to create controversy - the Rolling Stone magazine voted it the worst solo of all time. I was really surprised by that. To this day, after playing it over 40 years, I still find it a little masterpiece of a solo."