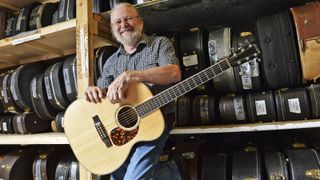 Of the many things we learned in our previous conversation with Jean Larrivée one was that, not only was he a proponent of the 12-fret acoustic guitar, but his favourite back and sides wood was something we'd never heard of: silver oak.

"I'll build you one. See what you think," offered Jean. Well, it took a while, but to be fair Larrivée has a good excuse: closing down his Canadian factory (Larrivée started making guitars in Canada in 1967) and moving his entire manufacturing to Oxnard, California where he's had his USA base since 2001.

It was a tough decision after so many years and so many good workers," he tells us today, "but the economy had put us in a difficult situation. So, finally, after selling our huge building - I have been living in California for 13 years and my grandchildren and the whole family now have dual citizenship - the decision was made to close Vancouver, and now California is struggling to keep up!

"We are back-ordered with 1,000 guitars, and more coming in daily. But I don't want to be another big American company: I want to make what I do best."

And for Jean, silver oak figures highly in his 'best' ratings. Also known as lacewood, "The silver oak (Grevillea robusta) comes from India, that's what it's called in India, not lacewood," Jean explains.

"It is one of the best woods I've used. We made our 45th anniversary [guitars] with this wood, so I feel very strong about it. It was a real surprise at the beginning. I thought it was a freak so I made a few others and the results were the same, so I decided to make many of them."

Many makers are reticent about describing the sound of certain woods, Jean is no different, but as he goes on to observe, "I find some people fall into the trap of 'listening with their eyes' when it comes to evaluating esoteric tonewoods. If the colour of the wood is light some people prepare themselves to hear a colder sound. If the colour is dark they want to hear a warm sound.

"Don't fall into that trap with this Grevillea robusta. If anything, it has a slightly more rounded attack transient, excellent balance and a very transparent midrange register. The overall sound seems to have a less aggressive edge with more delicate nuances: very pleasing to the ear!"

It's interesting, that silver oak aside, our recently-reviewed OM-03S uses the same bracing and construction as the standard 03 spec guitars - which use more conventional woods: mahogany, walnut or rosewood - but its sister swamp ash model has been tweaked, not least with scalloped parabolic hybrid bracing developed for the 40 series.

"We changed many things such as all rosewood parts - fingerboard and bridge - and the bracing was greatly altered. With those changes, the result I wanted was achieved; like electric guitars' rosewood fingerboard gives you a fatter sound - if we used ebony it would be too bright."

Maybe it's time a few more makers and players opened their minds and ears to different tonewoods. We'll see...

Check out our full review of the Larrivée OM-03S on the link below.