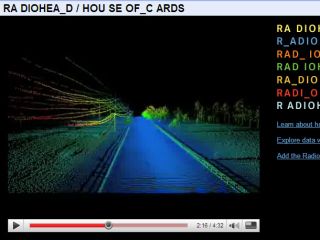 It's very dark in there

There's been plenty of hype in the last week over Radiohead's 'camera-less' video for House Of Cards. The video directed by James Frost of Zoo Films, uses Geometric Informatics and Velodyne Lidar technology to capture images without the use of conventional cameras. Clever stuff, and the video has impressively amassed half a million views on YouTube in two days.

However, reaction to the video in the MusicRadar office was mixed to say the least, so we decided to ask the editor of 3D World magazine, Jim Thacker, for his views on Radiohead's use of the technology.

"It's new ­- but it's not that new," says Thacker. "Laser scanning and LIDAR have been used on movies for years, for creating digital stunt doubles for actors and reconstructing background environments. Architectural visualisation companies increasingly use LIDAR in their work, too. And you can buy desktop laser scanners for £1500 - which, by the monstrously expensive standards of 3D work, counts as extremely affordable."

Jim Thacker adds: "What most people do is to use the data you get out of them as the starting point from which to create a 3D model, which they can then clean up and prettify by hand. What Radiohead appear to have done in the video is to put the data itself on screen. In conventional 3D terms, it's a bit like serving the eggs and flour instead of the actual cake.

"The production team has also done things to deliberately 'dirty up' the data, like putting sheets of perspex between Thom Yorke and the scanner, which you wouldn't normally do in production. Artistically, it's a brave thing to do, but technically, it's not really that groundbreaking.

"It is a very Radiohead thing to do, though."

Radiohead have clearly scored a big hit with their huge fanbase, but the 3D video experts aren't so easily swayed. Still, it's a good song? Add your own opinions below.