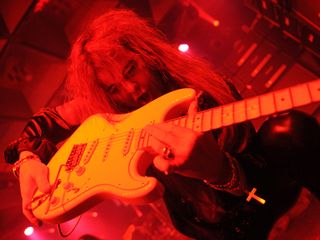 Yngwie loves this Strat so much, he just might eat it. © Larry Marano /Retna Ltd./Corbis

Va-rooooom! "Hi, it's Yngwie J Malmsteen here," says the carefree voice on the other end of the phone. "I want to make that clear because there's all these other Yngwie Malmsteens and guys with my name floating around."

The renowned guitarist lets out a loud laugh, which is immediately overtaken by the sound of a roaring car engine. "Oh, that's my new Ferrari," Malmsteen says, cackling. "I'm cruising around Miami Beach in the latest edition to my collection. Now I have four Ferraris. But I want 40 of them. Hey, not I'm not greedy at all!"

No, not hardly. If his latest album, the shred-o-riffic Relentless, is successful, Malmsteen may be able to cram another model or two into the garage. But 40? "OK, that might take some doing," he admits. "Still, I dream, and that's what it's all about, right?"

While whizzing down the I-95 on a 68-degree December day ("that's cold to me anymore!"), Malmsteen took the time out of his schedule to answer questions from MusicRadar readers. "If you can hear me, let's go for it." Va-rooooooom!

Bjorn asks, Could you please give me some advice on how to keep the high E string from slipping off the fretboard on your signature Fender Stratocaster from 2007?

"That's a good question. I'll be honest, the neck is angled slightly downward, which could be causing you to pull the top E string off a bit if you're bending it a certain way. You can try holding the guitar a little different and tilting the guitar so that it sits against your body with the neck facing you more instead of down towards the floor.

"If you want to change the position of the neck, you can do it by adjusting the truss rod, or you can try raising the action on the top strings at the bridge. If you're uncomfortable doing these adjustments yourself, I'd suggest taking the guitar to a good luthier in your area."

Robmk21 says, I can play typical pentatonic rock licks and solos. What I want to know is, what classical composers and guitar scales have influenced your style?

"It's not necessarily classical composers, but I can see how you might think that. I would say, if you want to broaden your range and incorporate some different sounds into your playing, you should familiarize yourself with the Phrygian mode and scales like harmonic minor and melodic minor. There's simply more interesting choices of notes that will be available to you. If you're playing kind of a straight blues pentatonic scale, you're giving yourself less options."

Rickallen says, You have written some great music on your own, but I'm sure many people would love to hear you collaborate with others again. Do you think you will ever do this someday?

"Mmm, probably not, The way I compose is very special. If you look at somebody like Bach, he didn't need collaborators to write for keyboards, cello, violin or anything else. I feel the same way about my music. The times that I have worked with other people, I've been very unhappy with the results. I don't work with anybody on the music, of course. But my God, some of the lyrics that other people have written were so shallow: 'Hey baby this, hey baby that.' I need substance to the words, you know? Give me depth!"

Adari asks, How old were you when you perfected your technique?

"I think it was yesterday! [laughs] No, the truth is, you can never perfect your technique. There's no such thing as 'perfect.' If you're dedicated, you're always learning and improving. But you do get to a certain point where technique isn't an issue anymore, and for me, it was probably when I was in my early teens.

"What I mean by that is, I learned what I needed to know and got comfortable as a player. I didn't have to apply my mind to the aspects of scales and playing, and instead I focused on creativity. I wrote music, but I didn't 'practice' it. So yeah, you can always get better and improve your technique, but hopefully, that comes through being a musician and composing and being a creative individual."

The Meat Man asks, Would you ever consider forming your own super group like Joe Satriani did with Chickenfoot? If so, who would be on your wish list of players?

"'The Meat Man' - all right! You know, I'm always open to possibilities. I've learned not to say, 'No, I'd never do that.' As far as forming my own band like what you're talking about it, I haven't thought about it. I'm too busy doing my own thing. Sure, if somebody came to me and had a good concept, yeah, I'd think about it. I don't have a 'wish list' or anything. There aren't any singers or others players I'm dreaming about."

Richard Ottaway wants to know if you'll be touring the UK next year.

"I will make sure it happens. I don't book the tours, so there's nothing scheduled for the UK at the moment. But I'd love to play there again as soon as possible. Will it happen in 2011? I would say so, but again, I don't know of any firm plans."

David Doneit-Malmsteen O'Mullen asks, How does it feel to be God?

[laughs] "I don't know. You'll have to ask somebody else that question. But thank you for such an incredible compliment. That's very kind of you."

Jackie Zambrano asks, If you had to play another guitar besides a Stratocaster, what would you choose?

"Nah. There's nothing else. A Strat is the guitar for me. I can't think of any other kind of guitar, really. If I really had to choose something, OK, perhaps a Flying V. But you know, I'm pretty much a purist and very set in my ways. Even if I was playing air guitar, it would be with a Strat. [laughs]

"I'll tell you something kind of funny. Years ago, when I first started becoming known, Gibson contacted me and asked if they could make a guitar for me. I told them, 'I only play Strats.' And they were like, 'Whatever you want, Yngwie, we'll build it for you.' So I said, 'In that case, build me a Strat.'

"And they did! I was only joking, but they built me a Strat-shaped Gibson, and it had a scalloped neck and everything. I still have it - it's this red, Strat-like guitar, but it's made by Gibson. Plays nice. But you know me, I'm a real Fender Strat guy till the end."

Craig Williams asks, Yngwie, what's with you and the Rolexes? Why so many?

"Oh, don't start on my Rolexes, man! I love 'em. I'm wearing a Rolex Daytona right now. Seriously, you can't beat the Rolexes. They're absolutely beautiful. My grandfather used to collect them, so maybe I got that from him. I remember I was on vacation once as a kid, and I looked in this store window and I saw a Rolex watch. It practically glowed. I said out loud, 'That's what I'm going to have one day.'

"There's just something magical about them. The craftsmanship, the history, the look - they're works of art. I have 40 of them. I have a couple that are worth $100,000 each. I'm crazy that way: Strats, Rolexes, Ferraris - I collect everything! If you can do it, why not?"

Lonely But Happy asks, Are there any new guitar players on the scene who impress you?

"I'm sure there are a lot of great players out there, but I just don't have the time to listen. It's not that I intentionally tune them out, but I literally can't find the hours in the day to check out new stuff.

"I do like a lot of players. BB King, Brian May, Eddie Van Halen, Allan Holdsworth - they're all great. Probably the last player who made a real impact on me was Ritchie Blackmore, and I was nine years old at the time."

Jayne Davidson wants to know if you would ever do a residency gig somewhere and perform all of your albums from beginning to end.

"Wow! I never thought of that. Hmmm, something like that could be fun and interesting. Yeah, that could be cool. It would take a bit of work, but hey, I'm into work, you know?"

Joe Holesworth asks, What originally got you interested in scalloped fretboards?

"I was 12 or 13 years old, and I was apprenticing in a luthier shop. I saw a lute that had a scalloped neck, and I was fascinated. At that point, I was already pretty good at building instruments and anything else you could want. If you gave me a tree, I could build you a guitar. Seriously. It was no big deal.

"I took a cheap-o, piece of crap guitar, one of those things you buy from a catalogue, and I made my first scalloped-neck model. It came out great. I didn't have to ruin a bunch of guitars till I got it right. From that moment on, that's what I did to all my guitars."

Wendy Foster asks, What's the most embarrassing thing that ever happened to you on stage?

"The most embarrassing thing? Wow, that's tough…there's been so many. [laughs] No, I'm kidding. Really, the only thing that's ever been a problem on stage was when there was a mess-up with the gear or I couldn't get the sounds I was looking for. That was more frustrating than embarrassing.

"Personally, I'm beyond having bad nights on stage. I don't believe in them. I'm like a tennis player; in fact, I am a tennis player! To me, you have to forget all about your last point. It's on to the next one. You make a bad shot, you fuck up - so what? Hit the ball and keep going. Same with gigs. You hit a bad note - who gives a shit? Keep playing. Nobody will ever remember that bad note unless you make a big thing about it. What they will remember is that you played a great show with your heart and soul and you gave it your all. That's what counts."