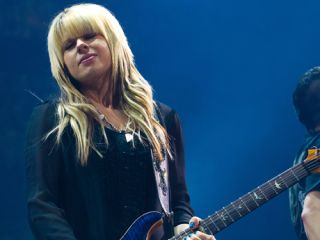 "Things are great!" Orianthi practically chirps into her cell phone. She's driving in sunny LA, en route to a rehearsal with Alice Cooper and his band. "We're going to play The Whisky tonight, which should be loads of fun." she says. "We'll have some special guests, so it'll be really cool, everybody'll be rockin' out - I can't wait!"

Enthusiasm is obviously no problem for the 26-year-old Australian-born guitar virtuoso, who is taking a break from recording her next album to tour with the original king of shock rock. "The last week has been a pretty intense period of rehearsals, but I'm having a blast," she says. "I'm really looking forward to hitting the road with Alice. To play with such an icon is a huge honor for me."

While navigating the rolling hills of La La Land, Orianthi took a few minutes to give MusicRadar the skinny on her preparations for the Alice Cooper tour and to talk about her upcoming album, which is due early next year.

How exactly did you hook up with Alice?

"I got an e-mail from Bob Ezrin. I worked with him on a Fefe Dobson song, and he reached me in Nashville, where I've been working on the new album. He asked me if I would be interested in joining Alice's band. I had played with Alice before - we did School's Out on American Idol - and the whole thing really appealed to me.

"It's been pretty crazy, as you can imagine, learning all of Alice's songs in a week. But I love a good challenge. Pushing yourself and digging into something new, that's what being a musician is all about."

You're what, 15 years old? How extensively do you know Alice Cooper's body of work?

"I'm a little older than 15! [laughs] You know, I've listened to School's Out, obviously, and songs like Poison, but I never really played any of the material in cover bands before. I always thought Alice was super-cool and a total originator, though.

"During the past week or so I've been manically learning the repertoire, and I've been really impressed by how well written the songs are. There's so many cool guitar parts and places for a player to stretch out. It's a lot of fun when Steve Hunter and I play together. This is unlike anything I've ever done before."

You're replacing Damon Johnson in Alice's band. Why did he leave?

Now, you've obviously got chops. Did you have to audition to join Alice's band?

"No. I was just asked to be part of it. So I kind of went in there and started playing, really. It was strange timing, in a way, since I was in Nashville working on my new record. I have eight tracks done - we should be putting out a five-song EP very soon. Once the tour is done, in January, I'll go back to Nashville and finish up the album."

Who's producing the new record?

"Dave Stewart. He's become a good friend. We've been working together, writing songs. He's really into the whole Nashville scene, and plus he's done so many great records. Just recently, he produced Joss Stone and Stevie Nicks. We've been having a blast.

"I really like Dave's energy and attitude about recording. We went in and did eight songs in one day. Of course, we spent time afterwards doing overdubs and background vocals and things. But yeah, eight songs done in a week.

"It's going to be a bluesier record for me. Dave's really into the blues and old-school stuff - his musical tastes are very deep and eclectic. We have a song called How Do You Sleep? which has a lap steel player on it. Something else that has been really great has been working with all of these incredible players from Nashville. The town has more amazing musicians than you can imagine."

How did you come to work with Dave Stewart?

"We both played on a Stand Up To Cancer benefit about a year ago. Afterwards, we got to chatting, and before you knew it we were writing songs and talking about recording in Nashville. It was very natural, the whole process."

You're a Paul Reed Smith player, but have you checked out some of Dave's extensive guitar collection?

"Yeah! He's got some fantastic guitars. These Duesenbergs that he has, they're really incredible. He used them on the record - he's played rhythm on some of the songs. The amps at Blackbird Studios are really cool, all of these old Fender amps. I'm using my PRS guitars, but I'm trying out different amp combinations, trying to see what sounds good and organic."

Is the album going to have any instrumentals?

What kinds of things have you learned from Dave Stewart in the short time you've worked together?

"How important lyrics and storytelling are. He's a brilliant lyricist, and since he's so into country music, which is all about telling stories, it's really rubbed off. Working with him has made me keener as to writing lyrics, definitely. Plus, he's a great arranger, so he's shown me how to structure songs a little better. You pick up bits here and there from being around somebody who really knows what they're doing.

"I have to say, it's been so inspiring to work with all of these blues musicians in Nashville. I do love the blues and have played it for a long time, but when you play with other people who are so schooled in the blues, it changes you, it makes you better. This is going to be a much different record from my last album, Believe."

Undoubtedly, after your experience with Michael Jackson, you were asked to join numerous bands and touring situations. Why Alice Cooper?

"It just felt right. It's real rock 'n' roll, and very different from anything I've done before. I love the theatrical aspect to what he does, how it's like the Rocky Horror Picture Show. It's a real show, not just a concert. He's an amazing performer, a real presence. I knew I wanted to do it."

You're the only girl in an all-male band. Is that weird at all?

[laughs] "I don't know. Hmmm…I don't think about it, really. I just play. Everybody's been super-cool. They've been so welcoming and sweet to me. Being the new person can be strange sometimes, especially in a band like Alice's, where people have been with him for long periods of time. But the guys have been terrific. I'm just trying so hard to learn all the material - it's a real cram course."

Is Alice OK with you improvising, or does he want things to be played like they are on the records?

"You know, he's fine with a bit of improvisation, he wants me to do my thing, but we're performing a lot of classic songs, so the idea isn't to stray too much from the records. I don't mind playing the parts that everybody knows. It's great fun, it's a challenge, and I'm having an awesome time. I think this tour is going to be fantastic for everybody."