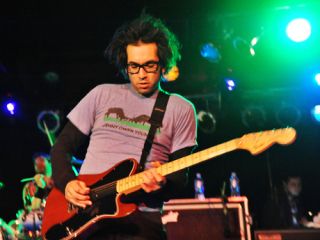 In their 15-year-career, the Minneapolis-based band Motion City Sountrack have released five studio albums and a sizeable amount of EPs. But there's a moment on the song Everyone Will Die, from the group's latest disc, Go, that makes singer-guitarist Justin Pierre feel as though they've finally arrived.

"We have a string quartet on that song, and they sound incredible," Pierre says. "Hearing a real string section on one of your songs is such an indescribable feeling. It almost legitimizes everything you've done for the past 15 years. We've had synth strings on other songs, but there's no substitute for the real thing. You can tell the difference."

Having ended their brief association with Columbia Records two years ago, Go marks Motion City Soundtrack's return to Epitaph, the label they first signed to in 2003. Go is a bright, rich and melodic affair, and a surprising one, too, since much of the album's lyrical content deals with mortality and Pierre's heightened adult worldview.

Pierre sat down with MusicRadar to talk about the new record, how he makes the heavy seem not so heavy and why he likes an effects pedal called WTF.

One would think that each time you make a record, you come away with a new perspective. What did you learn about the band on this album?

"Well, I have to say that making this record was very different from anything else we've ever done. On all the others, we had written our 12 or 15 songs before we went in the studio, and various songs were approved by the label and all that stuff. Everything was well sorted out.

"This time, however, we booked the studio time without having the songs. We knew we were going to write songs, and we wrote something like 50 ideas. Some of those were fully fleshed-out songs and some were just bare bones guitar-and-vocal ideas.

"It was great because we worked with our producer and friend, Ed Ackerson, and he's just the most amazing guy. He was in the band Polera, and you know, I grew up worshipping him. It's really cool to go from fan to friend. But we had worked with him before, and he knows what to do with us - and that helped in this new way of making a record.

"There were positives and negatives to all of this, a negative being the writing of the lyrics. I would've liked more time because I felt as if I was just jumping from one thing to the next. But the experience in and of itself was a great one. It proved that we could make a record on our own. We learned that we don't need anybody looking after us. We didn't have a label while we were making it. Signing with Epitaph was something we did at the end of the record."

"Well, absolutely, because it was! [laughs] There's outright mistakes that we left on the record because they were so fun and fresh and interesting. The biggest one was Josh's guitar solo in Son Of A Gun. He didn't know Ed was recording it, so he was just playing along to the track, and he was just in this slacker mood of what the song is [laughs]... It wasn't fully fleshed out, but what he played was so fun and right for the song - it was almost like he was making fun of the solo - that it was perfect. And then Ed's dog is barking in another song. [laughs] So there's things like that."

Word is that you were obsessed with death while making the record. What was going on there?

"Yeah, I was thinking about death a lot. [laughs] But you know, being obsessed with death has caused me to enjoy life a lot more. Over the past few years, I've had to sort things out. All of my friends are getting married and having kids, and time is moving on. Suddenly, I'm not the youngest guy in this generation. Soon I'll be in the middle, and then I'll be the oldest, and then I'll die. That's how it goes. Everything I wrote on this record has elements of life and death.'

And yet, the song Everyone Will Die has a wistful, hopeful quality - kind of like Pet Sounds-era Beach Boys.

"Yeah! And that's what I wanted, for the song to have several different feelings. I mean, you could look at a title like Everyone Will Die as a total downer, but I think it's uplifting. Sad songs can do that. Things that seem depressing can be the opposite. Love - or the lack of it - is what holds these songs together. Life, love and death. Hey… that's a Woody Allen, title, right?" [laughs]

It certainly is. So, what does the band say to you when you're coming in with all of these songs dealing with mortality?

"They rarely say anything negative to me. Usually, it's once they leave the studio with the album that they really listen to it. I can't speak for them, because I don't know. But there was a song, Timelines, and I went through so many revisions, and at one point Josh said, 'I think the song is too specific to you, and it's really dark and gross and weird. Is there any way you can make it more relatable?' Ten years ago, I would have told him to fuck off, but now I'm really in the spirit of us being a team."

How do you and Joshua Cain divvy up the guitar duties? Was anything different on this record?

"In the past, it was both of us trying to come up with the more weirder, interesting things. We kind of fought for the same space. Our relationship is easier now. Like, if he would bring a song idea to us and all the guitar parts were worked out, so be it - that makes sense. If there's room for me to write something, I will.

"Usually, when I write a song, I'll have a very simple guitar part and the vocals, but the vocals are the main thing. So Josh will end up writing something on a song that I bring him. The songs that he brings in will either have room for me to play or they'll already have the guitar parts there."

There's a pretty cool, quirky guitar figure in the beginning of the song Boxelder.

"Yeah, that was one of Josh's songs. I think I played the pre-chorus in that, but that was a song that Josh had worked out pretty much with the guitars."

Son Of A Gun has a tricky little beat. Did you have a vocal melody first and the rhythm came later, or did everything come together at once?

"That was one of my songs. I really thought the band would hate it, but they didn't, which was really cool because the song is so out there and weird. The beat, though, that wasn't there, and [drummer] Tony [Thaxton] really struggled for a long time trying to figure out what the hell to do. He and Eric put a lot of percussion stuff down, all sorts of crazy elements that all worked together. There's so much going on, but the funny thing is, once we had the rhythm tracks, the song became a song, and then my singing just fit."

What kind of guitars did you play on the record?

"Well, Ed has a ton of stuff, just an incredible amount of guitars, drums, basses, synthesizers, amps - it's amazing. His place is Flower Studios in Minneapolis, and it's really something else. As for my own guitars, I've got two main ones, a 1972 Custom Tele and a '73 Tele Deluxe. I use those in the studio.

"Live, we have these new ones that we bought, and we gutted them, put in new pickups, and made it so the guitars only have volume knobs. I have acid for sweat, and I destroy guitars, so we had to put in these pickups - I'm not sure what they are - so they don't get ruined.

"I used this one pedal at Ed's place… I can't remember what it is. There's another one, though, it's mine but he has one, too - it's called the Fuzz Factory by ZVex. Plug right into that pedal and you get the craziest, weirdest, most ear-piercing Flaming Lips-type sound. I have this friend at Loud Button, and he makes this pedal called WTF. It's sounds like an Atari videogame. It's almost like having a laser but in the '80s. So it's futuristic in a retro way."

You're big on Hiwatt amps.

"Yep, that's what I've been in love with forever, although we've used Vox amps in the past. We have a friend who makes amps. He works at KG Audio - that's what Josh has been using - so I had him make me a cabinet. I'm using a Hiwatt head through the KG cabinet. The guy is actually making me a KG head that sounds like the Hiwatt, so I might end up using all KG stuff."

You're back on Epitaph. Does the label feel like home to you?

"Totally. That's why we're back. We weren't signed to a label when we finished the record, but really soon after we got calls from a few labels that wanted to meet with us. One of them was Epitaph. Just being around them again, being back at the offices… it felt like home. We were like, 'Why did we even leave this place? Let's hang out with these guys some more.' So that's what we're doing."