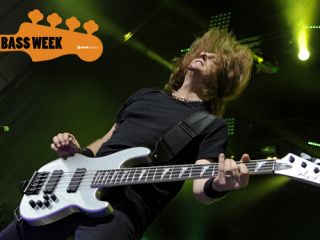 "My philosophy on playing metal bass is simple," says Megadeth's low-end master, Dave Ellefson. "I try to be the mortar between the bricks that glues the building together. I know it might sound weird to base music on architecture, but the analogy really holds true. Without that strong glue, a building falls down. The same can be said for music."

According to Ellefson, the foundation of metal music is based around guitars first and drums second. "So if you want to be a metal bass player, you have to be a one-person support system," he says. "The trick is in creating a role for yourself that allows you to enhance the song, which means what everybody else is doing, while occasionally you get to be out front."

Ellefson practices what he preaches on Megadeth's bold, fierce and riveting new album, TH1RT3EN, which is due out on 1 November. In celebration of Bass Week, we sat down with the affable and thoughtful musician for a quick yet thorough guide to playing metal bass.

The riff is king

"In metal - and probably most music, really - the drummer is the metronome for the band. With rare exception, it makes sense to follow what the drummer is doing. But you can get into grey areas sometimes, particularly in metal, where the drummer might be doing something that is extremely complicated. To just follow the drums means you're putting a note behind the kick - or, as I like to call it, the 'cannon blast.'

"I find that playing with and around the guitar riff has allowed me to have my biggest impact as a bass player. It's also a big reason why I mostly play with a pick, because I can be very articulate and precise in how I perform my lines and make them crisp and clear - the way the guitars sound. It also lets me hunker down, jump in and play with the riff.

"When you're playing metal, you don't want to do anything that deviates from the riff. The riff is king in metal music. If you ask me, it should be king in all music, but especially in metal. In fact, there are times when all of the stringed instruments in the band should be playing nothing but the riff.

"However, there's this catch-and-release thing that happens when the riff ends, or those moments when you're not in the riff - you could be in a verse or the chorus - and those are the times when a bassist can be extremely creative. At that point, you can start to work around vocal melodies and be liberated from being tied down to just a guitar or a guitar-drum paradigm."

Who says guitarists get all the glory? © Chris Schwegler ./Retna Ltd./Corbis

Be the center of gravity

"Even when you have dual leads or the classic twin-guitar attack thing going on, you still have to hold down the fort and drive the the song and that riff home all the way. If you do anything to get in the way of the riff, you're doing the song and the band a huge disservice.

"Adding that second guitar player changes things considerably. Often times, you have to try to align yourself with one guitarist, and it's usually the guy who's doing more of the rhythms. That can change from song to song, and it can even change within the same song. Think of the guitarists as bookends. Your job is to be what's holding these bookends up…even if they're moving all over the place."

"I started to play bass in 1976 when I was 11 years old. A lot of my influences at the time weren't 'heavy metal' per se; they came more from the hard rock school. I listened to a lot of American rock - I didn't get into things like Black Sabbath till I was a little older.

"I wanted to be a really good bass player, but I also wanted to be an effective band member, and the way I went about it was to understand the other instruments - by learning to play them. If you want to get inside your guitarist's head, you should know what it's like to do what he does. Same thing goes for drums: if you can, learn how to drum, even a little. Doing that really made me a better player.

"I came up with bands like Aerosmith and KISS, but I also listened to a bit of jazz. Even though they hardly ever repeat the riff in jazz - nothing is ever done twice, it seems - I found that the genre was very inspiring when it came to my bass playing. I liked what Gordon Johnson, who played with Maynard Ferguson, did. Stanley Clarke was another great one.

"Not to say that you have to turn your back on what you love. I found guys like Dennis Dunaway, who played with Alice Cooper, and Bob Dailsey, especially his work on the first couple of Ozzy records, to be very inspiring. Dailsey's compositional approach blew me away. A lot of the time, he would be playing a song within a song.

"So look around. If you're into metal and hard rock, find the really creative players. But don't be afraid to cast your net a bit wider. You might find somebody in country or funk that makes you a better player."

Practice time should be fun time

"The idea of sitting in a room and woodshedding difficult patterns over and over for hours on end never excited me that much. It just seemed like torture to me. Why should practicing be this horrible ritual, something you're going to dread? That will only last for so long…and then you'll give up.

"What I do is, I play bass along with a drum machine. It's a lot of fun to go through all the different beats and patterns, whether they're swing or bossa nova or even country, and play along to them. I get in this zone and play little songs. It's very entertaining, and I find that it gets me out of any kind of rut I might be in.

"One should definitely practice, but practice has to be something you look forward to."

"Some more about using a pick: For the most part, I do like playing with a pick, especially with metal where a hard and cutting sound is important.

"There are some times where you might want to vary your tone and attack, and using your fingers will come into play. On the song 13 off Megadeth's new album TH1RT3EN, I used my fingers because I wanted a different kind of tone. It affected my playing, too - by raking my fingers across the strings, my note choices were expanded.

"Using a pick is great for certain things, but not everything. Definitely learn to work those fingers - all of them."

"Your tone should be a very important part of what the band sounds like. You should try to have a trademark sound, but you also have to be flexible and adapt to the other players. Having a 'this-is-what-I-sound-like-take-it-or-leave-it' approach won't get you very far.

"The Megadeth guitar tone is built on the sound of Marshall amps, which is very thick in the midrange. To work with that, I developed a sound using active pickups and very modern, high-tech amplification, which put a really big wallop on the bottom end. I also added a very clicky, noticeable presence to my treble frequencies. So I almost scooped the midrange completely.

"For me, the combination of Jackson basses and Hartke amplifiers really delivers what I need. I have my own bit of real estate in the sonic spectrum of Megadeth. It's taken me a while to figure it all out, but I'm glad I did. If you want to add to the music, you have to do it in a way that works with the music, not against it."