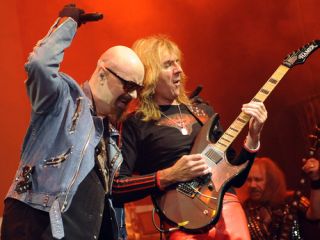 "There's been some confusion about this farewell tour," says Judas Priest guitarist Glenn Tipton. "While we are calling it a 'farewell,' it's really the Epitaph World Tour. People think we're going away, but we're not. We're just not going to do these long treks around the planet anymore."

Seated in a suite in New York's Essex House, Tipton elaborates on the rigors of touring, and why, at the age of 63, he just doesn't find it as fun as it once was. "Doing a proper tour of the world takes 18 months to two years," he says. "That's a huge amount of time to be away from home. We've done it and done it and done it. So we finally decided, to be a more effective band, and hopefully a more creative one, to focus on making music without the obligations of touring."

Ironically, just as Judas Priest announced their Epitaph tour last year, Tipton's fellow guitarist, KK Downing, tendered his resignation. Rather than pack it in, however, the band picked London-born axeman Richie Faulkner, 31, as his replacement. "Richie's been fantastic," says Tipton. "He's young and fresh and full of enthusiasm. We really feel that we can continue forward in a proper way with him."

Tipton and Faulker sat down with MusicRadar recently to talk about the tour and explain why "farewell" doesn't necessarily mean "goodbye." In addition, the two guitarists - one a certified heavy metal legend; the other a dedicated admirer, thrilled to be sharing the stage with an idol - discussed plans for the next Judas Priest album.

So Glenn, you're stopping touring to make records. That's kind of a radical approach these days.

Glenn Tipton: "Yes, I suppose so. Well, you know, we're not as young as we once were - that certainly has to be considered. Really, to me, the great thing is to have more time on our hands. We'll do at least one more album, if not two. We've already done some writing with Richie, and we're looking forward to making a record with him. There's a lot of options open to us."

Richie, does this feel weird to you? You've just joined a band that's doing its last tour.

Richie Faulkner: "But there will be a future, that's the main thing. There will be more music. I still can't believe this is all happening to me. It was a huge honor to even be considered to play with Judas Priest. To be with them on stage every night is unreal."

Glenn, when KK left the band, was it a horribly painful time for everybody?

Tipton: "It wasn't easy. Ken [KK] e-mailed us last November that touring was a problem for him because of some wrist difficulties he was having. He'd obviously thought about it quite a bit. It was a shock to all of us. For a while, we thought it might be the end of the band. We didn't even try to look for another guitar player for three months, just in case Ken changed his mind.

"But he was set that he was leaving. There wasn't any bad blood or anything - we totally understood his attitude. I'm sure the decision to leave was hard for him, and we respected that. Still, it left us wondering what to do."

"We'd already announced the farewell tour, so we had a conference call with everybody in the band to try to figure things out. The general feeling was that the fans wanted to hear Priest one last time, so if we could find the guy, a new guitar player, then we would do the tour.

"And before you new it, we found Richie. It was amazing! He fit in immediately. He committed himself fully, and he made the decision for us to go back out on tour a very easy one. Now we can do what we want to do, which is play Priest music to all of our fans around the world."

You and KK had a very identifiable twin-guitar sound. Did you worry that you'd have to change what you do in order to play with Richie?

Tipton: "No, not at all. In fact, one of the nice things about Richie is, he captures the essence of everything that is Priest. He does what he needs to do, but he does it in his own way. We spotted that right away, and it gave us the strength to carry on. If it weren't for Richie, I don't think we'd be around right now."

Faulkner: "When I joined the band, they told me that they didn't want a KK clone. Going out there and copying KK's every note wasn't what they were after. They said that I should go with my own style and personality, which I do have.

"I didn't have to put on a different hat to do all this, which is great. I've always been a KK fan, so I knew I could play his parts in my own way and make them very exciting. I take the best of what he did and add my own flavor. At the same time, I don't want to piss all over what KK did. I play what works. It's a balancing act."

Tipton: "Richie's style and technique are fantastic. Plus, he's a great guy. We get on well. Everything added up to him being the right guy to let us carry on. But to go back to the original question - no, I can still play the way I've always played with Richie. I don't have to change a thing."

Richie, not to put you on the spot, but how big an influence has Judas Priest been on you through the years?

Faulkner: "Huge. Massive. You know, like everybody, I got into the guitar because of Jimi Hendrix. After Hendrix, I moved to heavier stuff like Priest, Sabbath, Maiden, UFO - all the great bands. So I was a big Priest fan and was into dual-guitar playing. I love that whole sound and style."

Tipton: "We've already started it as far as some writing goes. We have a very heavy schedule in front of us right now, but as soon as the tour is over we'll take a nice rest, and then we can get into the studio and write and work on the album."

Rob Halford has said that the next record will be the follow-up to Nostradamus.

Tipton: "Yeah, well, we did Nostradamus, and as a conceptual album we got enough off our chests. I think you'll find the next album to be typical Priest, what everybody loves about the band and expects from us. It'll be fast, full of screaming vocals and full-on guitars. We are dedicating a couple of anthems to the fans out there - our way of saying thank you for standing by us all these years."

Faulkner: "I can't wait to get in there and record with the guys. It might take some time because we keep getting offers to play live. But once we all get together and do it, it's going to be mind-blowing."

On the subject of Nostradamus, what did you think about that guy who was listening to it every day for over a year?

Tipton: [laughs] "Well, that's a fan, isn't it? You have to appreciate somebody like that. Nostradamus was a large task for us. It was an epic. We knew it wasn't what everybody expected from us, but it was something we felt passionate about. We never did what was dictated to us; we always did as we wanted.

"On Nostradamus, we wanted to do an album with classical and operatic overtones. It's the sort of record that you have to listen to from beginning to end; one or two songs just won't do. So all credit to that guy for entering the world of Nostradamus every day for a year or more. He obviously got it."

Even so, could you listen to the album every day for over a year?

Tipton: [laughs] "Well, I pretty much did while we were recording it, so I guess I probably could - and did! When you make a record, that's about all you listen to."

Richie, just curious, are you looking at what you're going to do after Judas Priest?

Faulkner: At the moment, I'm focused on Priest. That's really where my head is at. If it's down to me to keep the band going and inject a bit of energy, then that's my job done. You know, The Eagles' farewell tour has been going on for a long time now. I think I can see 10 years or so with Judas Priest."

Glenn, Judas Priest have been pioneers in the world of heavy metal. Do you think you can still be innovators, or is it inherently a young person's game?

Tipton: "I think we have a lot to offer. We wouldn't even continue if we didn't feel a fire burning inside us. That's the truth. Every time we start a new album, I'm excited to see what happens. You can't always guarantee that everything is going to be magic, but right now, with the touring going so well and the fans loving us, we feel we're in a good place. We have momentum and energy - and that equals creativity."