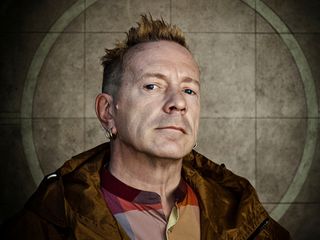 John Lydon. He wrote God Save The Queen and Anarchy In The UK. Any arguments? © Paul Heartfield

"Here's how I understand music," says former Sex Pistol, Public Image Ltd leader and all-around punk legend John Lydon. "If you can play the same bunch of noise twice, it's music. To go beyond that is supercilious and pontificating."

While not exactly pontificating during the course of an interview with MusicRadar, Lydon does speak freely - cheerily so, laughing loudly and often. The onetime snarling provocateur, who famously stared down Tom Snyder during a heated, confrontational TV sitdown in 1981, insists that the prevailing notion that he's some perpetually pissed-off misanthrope is a bum rap.

"I've always been a pleasant chap," he says, chuckling. "I love conversation and the sharing of different thoughts and philosophies. That kind of stuff always makes me happy. I don't mind interviews, either - I like doing them."

And he's downright bubbly chatting about This Is PiL, the first Public Image Ltd album in 20 years, an absorbing, wildly entertaining and surprisingly personal collection of adventurous rock, pulsing reggae and various forms of anti-pop.

During our 40-minute conversation, Lydon talked about This Is PiL and how the band operates, why he's not the nostalgic sort, what it was like working with guitar god Steve Vai in the '80s, whether he actually had any fun as a Sex Pistol and if he would ever consider getting back together with his first PiL mates.

Recently, you referred to the new PiL album as a "continuation" and not a "reunion." That said, it has been 20 years since you guys put out a record.

"Yes, well, that is a long time. The gap wasn't by my choice. It was an unfortunate situation having to do with major record labels, and I had to play the waiting game. They weren't interested in promoting PiL product, and then there was this lovely term called 'recoupment' bandied about. So I had to wait for the contracts to expire. And there's still a lot of debt that I have to pay off.

"Saying all of that, we've found ourselves in a very healthy situation, setting up our own label and raising money by our own means. You can imagine the amount of work that it takes. You have to make sure that you have enough gigs to pay wages and to use a recording facility. You have to project that over a two-year span. But it's all right. I don't mind."

This lineup features a returning group of players you've worked with.

"That's right, with the addition of a wonderful new bass player, who's a great fellow. I get on with him so well."

That would be Scott Firth.

"Yeah. And that's a clue why the album sounds as happy as it does - we really, really understand each other."

You've partly answered this already, but what do you find so exciting about this lineup?

"Our comprehensive understanding of each other. We've toured now for almost two years, and in that time we've had maybe one or two arguments - but no ego clashes. That's an astounding achievement for me, because I grew up with an understanding that your band members wouldn't like you, and that was that. So it's been something of a shock to realize that you don't have to put up with negativity.

"The two members I've loved working with, in any PiL format, have been [guitarist] Lu [Edmonds] and [drummer] Bruce [Smith], for very different reasons. You put all four of us together, and we have a creative cause that meets in such a great place. This album was nothing but concepts and thoughts and conversations. From the very first day, everything was plugged in, the microphones were set up, and we were staring each other in the face going, 'What are we going to do now?'" [laughs]

How do you write with the band?

"In all manner of ways. None of us have been lazy for two decades - there's been many other things to do. Of course, I'm always writing, but we used none of that earlier stuff for this; it was all from scratch. We know each others' limitations, but also our capabilities.

"Lu will be forever pushing my boundaries sound-wise and texturally, to see if I can grasp that next intriguing note. And I'll do the same to him, and we'll do it to each other. It's a genuine appreciation of each other. It's a wonderful place to be. I think I deserve it! [laughs] For fuck's sake, I've been through the grind all right." [laughs]

The title track, This Is PiL, seems to be based around the rhythm section. Is that how it came about?

"On that song, yes. That was something Bruce and Scott were fumbling around with, and when I heard it, I went 'Hoo-hooo! Can I have some of that vicar?' [laughs] There's no hard-and-fast way for us. We're chaos personified. There's no rule book, other than the song must be accurate to the sentiments portrayed. We're a combination of noise, notation, dissonance, coordination and words."

What about a song like Deeper Water? Groove-wise, there's some great things going on there.

"Yeah, that one was somewhat semi-improvised. We worked on the ideas in conversation for a long, long time, but then the engineer said, 'Look, the mic's on, we're recording. Better get on with it.'" [laughs]

Lu has so many great lines and textures on the album. What's your process for working with him?

"He's quite, quite something. We don't know what to call what it is that he does, so we had to give it a name: guitar. Which of all the things that Lu plays is probably the least. Anything with a combination of strings, he's into it. Things that take you into other areas."

On songs like One Drop and Human, you're sounding vaguely nostalgic. One doesn't get the feeling you indulge in this sentiment.

"No, it's not nostalgic. That would be you not quite grasping it. But don't worry - you've got all the time in the world. [laughs] No, listen, I've been away from PiL for nearly two decades, and what I want you to do is go back and redress the balance and explain what it is and what we come from - what I come from.

"In order to do that, I had to go through early childhood, teenage angst and into now what is allegedly called manhood. I used those scenarios to explain that the sense of values that I and we hold dear come from a learning experience - it's called 'life.'"

"Listen, it's not just musicianship that I have a keen ear for, it's sheer bravery and audacity, and people who are prepared to stretch the boundaries of what most musicians call 'common sense.'"

Is that what you would say Steve Vai did on that record?

"Oh, yes! Steve Vai, I think he kind of altered his perspective after working with us. He did some wonderful stuff after that. You know, his mind… He got out of just heavy metal, and that's a good, good thing. To this day, I rate the man very, very highly. Very highly!"

Did you know Steve's work before you guys worked together?

"Oh, yeah - bonkers! People think that I wouldn't be listening to stuff like that, but I listen to everything. It was great. It was Bill Laswell who put us together. The Album album, I had the tracks, I had rough working ideas for it, and so the approach to it was slightly different. Not bad, really. Out of a sense of desperation of 'Who the hell is going to be able to play this?' I was into the likes of people that were really willing to work with me. It astounded me at the time to see that I was respected. I wasn't aware of that. Too much of the British press had worked into my psyche."

What was your musical mindset when you formed PiL? Was it entirely different from when you were in the Sex Pistols?

"Expand. I learned how to write a song from the Pistols, and I loved that, but it was too limiting. It was too format. For me, it became a typical rock band - obviously, with some glorious twists. It was deeply frustrating. PiL was a very healthy universe."

There are so many negative tales about the Sex Pistols, but that couldn't have been all there was. Did you ever have fun with them? Were there good times?

"Oh, yes, Sid was my friend! I brought him in. Trouble was, it was very punishing for him. He felt that he needed to overplay his hand, to make up for lost time, I suppose, 'cause you know, as a band we were already fully established. Unfortunately, he opted for the cheesy way out, using drugs to reinforce his feelings of inadequacy.

"There's a lot of pain involved in things like that. I think that I pushed him into the deep end too quickly, and he wasn't mentally capable of handling that. Not many people are."

Has it been difficult for you to get beyond the Sex Pistols? Many people would be happy if you perpetuated that early image and kept playing the same music.

"Well, that's not their decision, is it? You can't let anybody own you and dictate what it is they think you are. My way of thinking as I approach any human being on this planet is 'What are you doing now?' That's what interests me. I don't come at anybody with a whole bunch of assumptions. And I expect better from the so-called literati."

You did a reunion tour with the original Sex Pistols members. Any chance you could get together again with Keith Levene and -

"No! No. Too many problems with him. Too many problems with many of those members. They never really helped contribute to anything and brought me nothing but problems and bad attitude. I had to deal with an awful lot supporting some of those fellows when I was starting PiL. They're just credit-hoppers, really. I'm glad I helped launch them and, like, their solo careers.

"God bless 'em and all that. And I love 'em, too. I view them as my babies. But they're going around doing silly things and talking shit. They're behaving like adolescent teenagers. [laughs] I can't wait for them to grow up, and then maybe there will be a common ground."