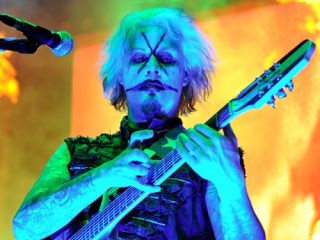 John 5 taps, shreds and flamenco picks on his upcoming album, God Told Me To. © Amy Harris/Corbis

If anybody embodies the spirit of the saying, 'Dare To Be Different,' it's John 5. With his horror movie makeup, a resume that boasts names as disparate as k.d. lang, Ricky Martin, Lynyrd Skynrd and Rob Zombie, and a unique playing style that's more than a little bit country and a whole lot rock 'n' roll, the Telecaster-toting Mr. 5 is certainly his own man.

5 takes a typically broad approach on his new album, Gold Told Me To (due out on 8 May), which artfully mixes various shades of genres (industrial metal, dance rock, Spanish-style flamenco) in a strikingly bold manner: half of the record is acoustic, half is electric.

True to form, 5 is promoting his solo album, due out on 8 May, not with his own tour but by hitting the road with Rob Zombie three days later. "I just love to get out there," 5 says nonchalantly. "I like to shake people's hands and get their opinions about my record. Any way I can meet the fans, I'll do it. And I'll get in front of a lot of people playing with Rob."

MusicRadar sat down with John 5 recently to talk about God Told Me To, his thoughts on the current state of music, why he chose to cover Michael Jackson's Beat It and what new gear is rocking his world.

How do you challenge yourself conceptually these days?

"I do try to challenge myself and try new things. It's like that saying: 'If you're not busy living, you're busy dying.' Just recently, I got a chance to write a song for Rod Stewart's new record. I know his music very well, of course, but the idea of writing something for him was a big challenge. But I did it, it turned out great, and it's going on the record. That's pretty thrilling.

"Next, I'm doing the score to Rob Zombie's new movie, and that's something I've never done before - a film score. So that's something different for me. The idea is to never get stuck in a rut, but I don't think I ever have, really - it's not in me."

Is rock or metal guitar stuck in a rut these days? What bothers you about what you're hearing?

"I look at it a different way. I don't really get bothered by anything. What I do is, I look at rock guitar players and I say to myself, 'What is this guy doing? What does he have that can inspire me?' I try to see what other people are doing and take what they have and turn it and twist it into my own thing.

"So, no, I don't see a rut out there; in fact, I see tons of great guitar players. We probably had a lull a while ago, but people are playing guitar now more than ever, and they're putting down the DJ stuff. A few years ago, it seemed as though everybody was a DJ, but now they're buying guitars again."

"The only thing that frustrates me is the computers. We have this station in LA called KISS-FM, and all the music is done with computers. I just like… music! I like people writing great songs on guitar or piano or what have you. I miss people getting on stage with real bands and real instruments and expressing themselves that way instead of with computers and technology."

You grew up on country artists and guitar players. Do you worry that the kind of musical upbringing you had is becoming a thing of the past?

"Well, sure. And it's happening, too. You know, I do a lot of sessions, and I'll be in the room with a lot of musicians who got record deals and were making records a long time ago, and these are great musicians. I mean really great! But now I see a lot of bands where the musicianship isn't that great.

"I miss everybody being so awesome on their instrument. Of course, there's a lot of people who are incredible. But people aren't concentrating on their craft the way they should be. I wish that could change."

What do you think could spark that - the next Eddie Van Halen, perhaps?

"You don't even have to be Eddie Van Halen. Let's take The Eagles, for example. They're so good at what they do. They're not like Eddie Van Halen, but they are so great at their instruments. Whatever they play sounds so good. To do what they do - and some of their chords and voicings - that takes a lot of skill and years of practice.

"When somebody great comes along... like an Eddie Van Halen or like Adele, who has everybody going, 'Oh my God, isn't she amazing?' Because she is amazing! You can tell she's worked so hard at her craft. So I do miss that."

How did country music impact your rock playing?

"I was always intrigued by the pickers. To my ears, that style of playing sounded really interesting. This was when I was very young. I learned a little bit of it, but it wasn't until I joined k.d. lang that I got really into it.

"She had a multi-instrumentalist who could play violin, mandolin, guitar and lap steel really well. He inspired me to dedicate myself to a different style of music. I always loved country guitar playing and picking, but at that point I decided to seriously study it and incorporate it into what I did."

Since you played with k.d. lang, you've performed with mostly hard rockers - Rob Halford, Rob Zombie… If Taylor Swift called you to be in her band, would you be tempted?

"That's a great question. I would, because I love going into different styles of music. But here's the thing, and it's the God's honest truth: I love being in Rob Zombie's band. I guarantee you that I will be in Rob Zombie's band until he doesn't want to do music anymore.

"But yes, if Rob said to me, 'I'm going to hang it up,' then I'd probably want to go in a different direction. I probably wouldn't want to do a rock thing. I'd want to play for a Madonna or something like that."

Let's get into your new album. You took longer to record this one than past albums.

"The reason why was that I was on tour a lot. With each record, I try to change things up for the listener; I don't want to just do country and rock stuff. So I decided to make a record that was half electric and half acoustic.

"But not just acoustic guitar - I'm doing Spanish-style acoustic and knocking on it rhythmically and stuff like that. Plus, I'm using violin bows on acoustics, and you know… whatever I can do to shake things up."

"It does, in fact. That title, Noche Acosador, was taken from [serial killer] Richard Ramirez - he was the Night Stalker. So it's Night Stalker in Spanish. [laughs] Stuff like that is interesting to me."

What kinds of acoustics did you use on the album?

"It's mostly a Martin D-28, which I've used for a long, long time. I also used a D-45. On Noche Acosador, you can hear the two guitars kind of talking to each other. Oh, and there's a nylon-string acoustic, too, but I don't remember which one that is."

"Yeah. On that song, I was inspired by some of the Spanish-style players who do very rhythmic things on the guitar. I tried to create that kind of vibe. I'm not paying homage to just any one artist, it's a lot of them.

"I tested that kind of playing out on tour with Rob Zombie during soundchecks, and everybody just stopped and looked at me like, 'Wow, that is really cool!' Everybody but Rob - he's always just like, 'Yeah, whatever. Let's get on with it.'" [laughs]

OK, let's talk about your cover of Michael Jackson's Beat It.

"I wanted to cover that song for a long time, even before Michael died. Of course, I love Eddie Van Halen, and I just thought, What a great solo. Dave - Roth - is a friend of mine, and he would always say, 'Eddie's been playing that solo forever.'

"That was interesting to me, and it got me thinking, Hey, I'm going to do my own cover of Beat It. It's such a world-wide song. You can go into any town around the world and say, 'Hey, you know that song Beat It?' Forget it - everybody will know it. I was dedicating it to Michael Jackson and paying homage to Eddie, as well."

John 5 and a special friend on stage during a Rob Zombie show, July 2011. © Amy Harris/Corbis

You do what sounds like a note-for-note version of the solo. You don't depart from the original in any way.

"Well, I like to learn things, and the way I do that is by studying music. The solo to Beat It, it's one of the most incredible leads ever. I might have done it a little too close, but… I don't know. It's such a famous solo. For me to play it any other way would have been wrong somehow. A solo like that, you have to do it perfectly. I wanted to give it respect.

"I knew that when I recorded it, nobody could say anything about it - that's how right it is. It's almost like I took Eddie's solo and put it on my song. But nobody can say anything because it's so perfect."

You have so many guitars to choose from - your own Fender signature line of Telecasters among them. Electric-wise, what's on the album?

"I have a new gold Telecaster that I used a lot; it's my favorite Telecaster right now. It's a gold version of my John 5 Telecaster. I also used a red, white and blue John 5 Telecaster - it's kind of like my Buck Owens guitar; I call it the 'Buck 5.' I also used my main Tele, this John 5 black and silver one. I didn't use too many guitars, actually. For the Beat It thing, I used a Telecaster with Floyd Rose - I needed a Floyd for that."

Keeping in mind what you said about computers, has there been a new piece of guitar technology that's knocked you out recently?

"I love all the things you can get on the Internet, things like Amp Farm and all the modulating software. Those things are great for writing; they have such interesting sounds."

Have you made any changes to your physical guitar effects?

"The only thing that's blown my mind - and it's been around for a long time, I guess - is the [Electro-Harmonix] Bass Micro Synthesizer. It's the only piece of gear that makes people say, 'Holy crap - what is that?!' People lose their minds over the sounds it makes. I incorporated it into my recordings. Live, it's very sensitive; you have to finesse it.

"Actually, live, I'm very bare bones, because when I used to go to concerts, I loved to see bands just play - like AC/DC or The Who… or Van Halen. I could hear everything they were playing, and it's because their rigs were so bare bones, just Marshalls and maybe some distortion pedals. So that's what I've done live. I keep things simple because I love a simple sound."

Last question: There's a video on YouTube called 'J5 Shreds,' but it's the real you playing. Are you fearful of somebody doing one of those joke 'shreds' videos?

"Those things are amazing! [laughs] Oh my God, the KISS I Was Made For Loving You one? And there's a Slipknot one? Those are incredible. I love them."