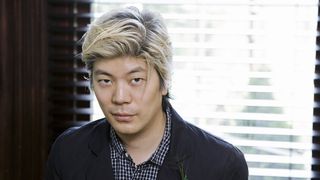 It's taken 14 years, but James Iha's new album, Look To The Sky, has been worth the wait. © Aliya Naumoff (Image credit: Aliya Naumoff)

"I became a race car driver," says former Smashing Pumpkins guitarist James Iha, lightheartedly explaining the 14-year gap between his new solo album, Look To The Sky, and his last, 1998's Let It Come Down. "Seriously, though, I don't really have a good answer," he says. "It just takes me a while sometimes."

Not that he's exactly been sitting around, uh, shoegazing: Since the breakup of the original Smashing Pumpkins in 2000, Iha has performed as a member of A Perfect Circle, started the power pop super-group Tinted Windows (which also includes Fountains of Wayne's Adam Schlesinger, Cheap Trick drummer Bun E. Carlos and Hanson frontman Taylor Hanson), formed a record label (Scratchie Records) and opened up Stratosphere Sound, a full-functioning recording studio in New York City.

Look To The Sky, full of brisk pop-rock/alt-rock songs that showcase Iha's bracing guitar playing, with tasteful guest spots by notables such as Karen O and Nick Zinner of the Yeah Yeah Yeahs, Tegan And Sara's Sara Quin and legendary Television guitarist Tom Verlaine, among others, is a winning reminder that Iha, the consummate sideman, does indeed have much to say on his own.

Iha sat down with MusicRadar recently to talk about Look To The Sky, why he thinks it doesn't matter what kinds of guitars he plays and to walk down a short stretch of Smashing Pumpkins memory lane.

OK, so driving race cars aside, just why has it taken you so long to make another solo album?

"I think when I started writing again for solo stuff, it sounded too similar to the first record. I really wanted it to be different. Not a lot different, but something of a change. Over the years, I went through making different versions of the record. Since I wasn't signed to a label and didn't have a deadline, it just took me a while to arrive at what I thought were a good collection of songs.

"What I wound up was a little bit of everything. There's electric, more rock stuff; the quiet stuff, like the first record; stuff that's a little bit more new wave, with kind of keyboard-driven songs. And the songs are different, too. It took me forever."

It must help that you have your own studio, Stratosphere Sound.

"Yeah, it's a commercial studio. Half of the work there is generated by me and the other two owners, and the other half is outside commercial stuff. We don't make any money, but that's almost a good thing because all of the owners get to work on their music. We've got a bunch of cool bands coming in. It's a great place."

Do songs come easily to you? I get the feeling that they don't.

"Writing music comes easily, but writing and finishing stuff for my solo thing, where I'm going to sing on it, that takes forever. It's much easier for me to just be the guitar player and play for other people. For whatever reason, when I do my solo stuff, I get in so deeply that it takes way too long. [Co-producer] Nathan Larson got me out of that. He gave me a little bit of confidence to finish things. He's great. He's scoring movies now, so he's really terrific at scoring strings and being able to hear the big picture."

What were your go-to guitars for this record? One would assume you have a pretty nice collection…

"You know, I've kind of become jaded - well, I'm jaded in general - but I feel that way about instruments. I have some really good guitars, like Martin and Gibson acoustics, that are vintage. I've got some great Les Pauls and Epiphones, too. But I really don't care. Honestly, whatever's lying around, I'll sort of pick it up and start recording with it. Unless the guitar is broken, I don't care.

"One of the main basses at the studio is a Squier, which is, like, Fender's low, cheap line of bass guitars. The thing sounds great. Everybody uses it on their records. So it doesn't really matter what you use as long as it sounds cool."

The first single, To Who Knows Where - is that an E-Bow I'm hearing?

"Actually, that's a Fernandes guitar. It's got these pickups that do what an E-Bow does. Like the E-Bow works on one string, but with the Fernandes, when you flip a switch, the whole guitar becomes 'E-Bowed.' It's a Sustainer. I love that sound - it's like you're playing the guitar but you're not."

You also get a great guitar sound on Speed Of Love. It's a very crystal-like sound - the guitar just breaks through the mix.

"I know what you mean, in the bridge of that song - the solo, too."

Are you a real effects hound?

"I do like effects. There are guitar players who like effects, and there are those who plug straight into the amp. I've always liked effects. Chaining fix or six pedals together feels very normal to me."

What was it like working with Tom Verlaine on the album? He's a pretty heavy guy guitar-wise.

"Yes, he is. He's cool. He's a real New York guy. He did some recording at our studio, and he knows one of the engineers who worked on the record. We had a couple of songs where it was like, 'Gee, it'd be great if we could have some really awesome guitar on these.' He lives close by, so we called him up, he came over, and he played tons of great stuff. It was super-easy. He's a great guy."

"It was a great band during a great time in music," says Iha of the original Smashing Pumpkins. (from left) Jimmy Chamberlin, Billy Corgan, D'arcy Wretzky and Iha. © Paul Elledge/Corbis

You touched on this briefly: For the most part, you've been a band guy. Does it feel natural to showcase yourself as a solo artist?

"No. [laughs] No, it doesn't. It's kind of frightening. Once you get into it… I definitely worked a lot on songwriting, song-crafting and singing. It's just… it's a lot more work, basically. [laughs] Playing guitar with other people is comparatively easy to being the main guy."

Billy Corgan and I have spoken quite a few times during recent years. I'm curious as to your take on your time in the band - when it was good, when it was not so good.

"Obviously, it was a great band during a great time in music. I hear that a lot from fans and people in general when they talk about the '90s. It was an amazing time to be in an amazing band. [laughs] You know, we definitely had our ups and downs. I just choose to be positive about it and remember the good things that we did, the records and the live shows."

What was the highlight moment of being in that band for you?

"It was a lot of work. Every record seemed to go bigger than the one before. It's hard to say. Highlights… I think some of the live shows. The energy from audiences was amazing. Playing Lollapalooza was certainly big. We did a tour in Australia, and there was a festival called Big Day Out that was pretty cool. I think the lineup was Soundgarden, Pumpkins, Bjork, the Ramones - when all the Ramones were still around. That was pretty incredible. Playing with those bands and for that audience… a special time."

Still, there were tensions within the Pumpkins. [Iha laughs] But a lot of times, band turmoil can still lead to great music.

"It's weird. We were talking about that kind of thing here at the studio with interns. When there's a band in the studio, they're excited to be recording, but sometimes there's this underlying tension. The band's nervous, the producer is sometimes nervous, so the last thing anyone wants to hear is something about a guitar sound from an intern. You just don't do that.

"I totally recognize what you're saying. But there is always shit going on and tension in bands. When you're recording music, you're putting yourself out there, and you've got to make it happen."

After the Pumpkins broke up, Jimmy Chamberlin rejoined Billy in a new version of the group, which lasted a few years. [Chamberlin left again in 2009.] Were you ever tempted to reach out to Billy? Was going back ever in your thoughts?