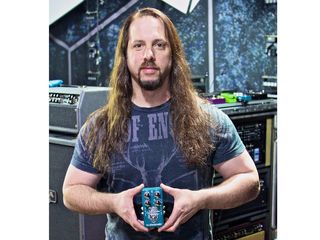 You might not be able to play like John Petrucci, but now you can get his sound

It's been a whirlwind few days for John Petrucci. The Dream Theater guitarist hit New York, Chicago and San Francisco in a 72-hour period, visiting Guitar Centers and demonstrating his brand-new TC Electronic Dreamscape signature pedal to throngs of fans in each town.

"I had a great time," says Petrucci. "Guitar Center had everything totally together, really pro, and TC was nice enough to put this whole thing on and promote the pedal. That they're paying so much attention to the pedal and to me is really amazing.

"And it was great to meet all the fans," he continues. "People were excited, they were checking out the pedal, buying them. It was a lot of fun. I really loved saying hi to everybody and spending some time with them."

The Dreamscape - an all-in-one custom stompbox that features chorus, flanger and vibrato effects - is a first for both Petrucci and TC Electronic in that neither the artist nor the company have created a signature pedal before. We spoke with the modern guitar master about the design of the Dreamscape and his relationship with TC Electronic.

How did idea for the Dreamscape take shape?

"It was a slow build for me, really. It's funny: For the longest time, I wasn't that into stompboxes - I didn't use them all that much. But during the past few years, I got the bug and started collecting things, all of these different overdrives, delays, chorus pedals. I got really into the whole boutique pedal world, and that's how I like to think of the Dreamscape - a modded, boutique-y version of the TC SCF [Stereo Chorus Flanger] pedal.

"I've used the SCF and the 2290 [Dynamic Digital Delay] for a long time. They're so great and versatile, and they've been a big part of my sound. So, combined with my growing interest in boutique stompboxes, it made sense for me to work with TC, particularly on a chorus pedal, since that's a huge part of my sonic landscape. What I wanted to do was use better components, have true bypass, cool blue lights and designs, and have a real road-worthy chassis."

Who did you work with at TC on the pedal?

"Really, the whole time I was working with Tore Mogensen from TC - a really great guy, super nice. Tore and I started talking and I told him my wish list for doing a pedal. Along with better components, I wanted it to be stereo in and out, and I wanted to make it less noisy.

"I'm not saying the SCF is noisy, but it is a pedal that was made 36 years ago, so things are quieter now. In addition, it was important that the pedal could be used both as a stompbox or in the effects loop. I think we did it all, too; nothing that Tore and I talked about didn't end up making it to the pedal."

Now, you've already created TonePrints for TC. These are incorporated into the Dreamscape.

"Right. I designed TonePrints independent of the Dreamscape, but the idea is that this is the pedal that they'll live in - and you can download TonePrints from the internet, too."

Sonically, how does the Dreamscape differ from the SCF pedal?

"It's like the SCF in that there's chorus and flanger, but there's another control for vibrato. What's cool about the vibrato is that you can use it like a pitch-shift type of thing. Basically, the pedal can do all variations of those effects. With the rotary control, I made presets: two chorus sounds, two flanger sounds and two vibrato sounds. And then there's a TonePrint slot where you can load in any modulation TonePrint you want.

"There's so many in-between tones, of course. You can do everything from the jet flanging sound to modulation chorus effects to Leslie flanging sounds - you can even do more subtle, almost doubling effects. It really covers an unbelievably wide range of sounds."

With the chorus sounds especially, what did you want to tweak and put your own imprint on?

"When we were making the sounds, there were specific uses I wanted to concentrate on. One was the clean sound, which I wanted to be really rich, broad and wet - something that makes you want to dive into. I use that a lot for clean arpeggiated intros to songs. But I'm also big into a distorted chorus sound, like you hear with Rush - Alex Lifeson's huge suspended second chords. I wanted to put a subtle, wide shape to that.

"Within that, we configured the rate and depth - all of those parameters are in the pedal. The point was to make everything very usable, because sometimes you get pedals, and the settings are so extreme that you never do anything with them. With the Dreamscape, I really wanted the sounds to be workable and usable."

What kind of testing process did you put the pedal through?

"Once it was designed, I got together with Tore in New York and hooked it up to a computer. Basically, we plugged my guitar into a Boogie and the pedal and dialed in all the sounds. With TC's stuff, I'm really connected to the sound - chorusing, especially. Tore pretty much put the sounds up and I said, 'All right, that sounds great!' We would discuss things like whether to make it a tri-mode chorus, a dual-mode, how wide and how deep are we going to make it, etc. The same thing went on with the flanger.

"The great thing about all this was that we weren't starting from scratch - we were already using the world-famous, signature TC chorus and modulation sounds and building on them."

Have you incorporated the Dreamscape into your live rig?

"As soon as I got the final prototype, this was when we were in Europe, I put it right into my rig. I had tried out a few at home, and they sounded great, but to me, the best way to test something out is what I call 'testing it out in battle' - just go out there, play a show and whatever happens happens. So I put it in my pedalboard, played some shows, and it sounded fantastic. I'm really happy with it.

"Using the pedal live has been so cool, and I'm really looking forward to recording with it. The thing with me is, if I use something, it's because I consider to be the greatest, whether it's an amplifier, a guitar, picks, strings, pickups or pedals. This pedal will be a real part of my sound from this point on, and I can highly recommend it to all of my guitar-playing friends out there."