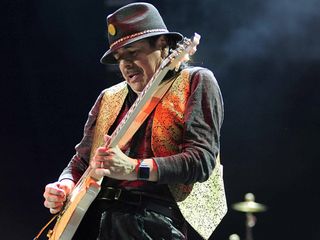 Carlos Santana still blows his own mind. Decades after he caused a sensation at Woodstock, the Grammy-winning, Rock And Roll Hall of Fame guitarist says that his greatest thrill as a player is when he gets out of his own way and sets sail for unknown territories.

"I'm happy to say it happens all the time," he says, "but it's based on the subtle things, the unconscious. You have to go inside the notes and see what's there, the things you don't know about. Teachers should say to kids, 'OK, you know the notes, the chords - now play some shit you don't know. That's when it really happens."

It all happens on Santana's bold and brilliant new album, Shape Shifter, on which the legendary guitarist takes a break from star-studded pop and lets his instrument rule the day, screaming and sighing, growling and swooning. Only one of the record's 13 tracks features vocals, which means that if you ever thought the only problem with any great Santana album was that it needed more Carlos Santana, then Shape Shifter should feel like something of a bounty.

"It's more a collection of stories than songs," says Santana. "Songs require intros, choruses, bridges, endings. On this record, it was more about 'close your eyes and play.' They're still songs, but they're not directed at radio. I was just being true to what I felt."

MusicRadar sat down with Carlos Santana recently to talk about Shape Shifter, his playing philosophy, his upcoming Las Vegas residency and why he feels that making ugly faces makes for great music. (For an audio preview of Shape Shifter, be sure to check out the scorching new track Nomad on page two.)

With the exception of one song, Shape Shifter is all instrumental. As a guitarist, is making this kind of record more satisfying?

"I'm never going to wait so long to brew 'em like this anymore. I'm going to make sure that I do one album like this and then another kind. I remember reading that John Coltrane would do one Pursuance album, and then he'd do a ballads album where he'd hardly play a solo - he'd just play the melody verbatim.

"I'm just really grateful I can do this kind of record. Jeff Beck does it all the time. Very seldom now does he do things with vocalists like Rod Stewart. For me, I need the balance."

When writing instrumentals, what's the ratio of structure to improvisation?

"It's more like loose sketches, and then closing your eyes and letting it happen. For me, it's normal and natural to play this way. With other types of songs, I have to be a lot more thoughtful with knowing when and where and when not to do something. Here, it's me saying, 'Roll the tape!'" [laughs]

Above: listen to Santana's Nomad from the album Shape Shifter.

You dedicated the album to Native Americans. Can you talk a little about that?

"Yes, I dedicated this album to them because I think it's important with where we are in 2012, since the world is supposed to end, and they know more than anyone about the shifts in perception. You know, Mother Nature is shifting - that's why there's more tornadoes. But as Bob Marley said, 'It's the beginning, not the end.'

"I'd like to do a yearly event like Bonnaroo and invite Native Americans from Alaska to Brazil, including Siberian shamans to Australian Aborigines, and do a concert, with artists like Sting - I'd sandwich it like that."

What kinds of guitars did you use on the album? Obviously, you used Paul Reed Smiths…

"I basically used anything that was in front me - Stratocasters, nylon-string guitars - anything I need to use to complete the painting. For amps, I used Marshalls, Dumbles, Boogies, Bluetone - mainly Boogies and Dumbles."

What's amazing is, you can play any kind of guitar and still sound like yourself.

"Well, I'm very grateful for that. I tried to sound like other people and I couldn't. I couldn't sound like BB or Otis Rush, so I gave up and said, 'Maybe there's a reason. Don't fight it anymore.'"

On the title track, the sound of Chester Thompson's keyboard recalls the classic Santana Hammond B3 from back in the day.

"Oh yeah. That's something we grew up with in the '60s, with Procol Harum and Robin Trower, the Whiter Shade Of Pale sound, or Jimmy Smith and Kenny Burrell… Jack McDuff and George Benson. For me, it's very natural. We complement each other very well, Chester and me. In the future, I look forward to doing something with my brother Gregg Rolie."

"Close your eyes and play" - Santana practices what he preaches in Switzerland, 2011. © LAURENT GILLIERON/epa/Corbis

The song Dom is a cover - originally it was done by Toure Kunda.

"Yes, they sang it, but we did it as an instrumental. I wanted to sing the parts myself. I love the fact that it sounds like Bob Marley with Yo-Yo Ma and Santana."

Your guitar tone is remarkable on the song Nomad. How much does tone affect your playing? Can you give a great performance if you're dissatisfied with your sound?

"Only if I really, really have to, if I'm sitting in with a band and I have no control over the sound. When I sit in with a band, whenever people invite me, I always plug straight into the amplifier, and then I'm going to sound good. Once I start going through all that stuff they have on the floor, I'm going to sound like an electric mosquito caught in a screen door. I don't want to sound like that.

"On Nomad, I purposely sound really raunchy and harsh. That's because the song is supposed to be like that. I like a loud electric zeetar - like Ravi Shankar."

But you use some pedal effects...

"Just a wah-wah and once in a while an Echoplex."

What do you use for distortion?

"You make some ugly faces and crank it up till it hurts and point it so that it doesn't hurt the band. Basically, you try a bunch of settings on your amplifier. I like to experiment like the African people do, with more pedals than Jimi Hendrix - here and there. But mostly, I want to utilize the amplifier and just make ugly faces."

You're not kidding about the ugly faces.

"Five things: genuine, honest, true, sincere and for real. You can't fake an orgasm. If people squirm and feel uncomfortable with that, I feel sorry for them. This is real life. Real life is about the peak of your emotions. Look at Stevie Ray Vaughan - when he's hitting the prettiest of notes, look at his face. Damn!" [laughs]

Going inside the notes in San Francisco, 1981. © Roger Ressmeyer/CORBIS

One would assume that you haven't tried amp modeling software or anything like that.

"I grew up in the '60s, and the sound coming out of an amp... see, you're moving air and molecules. Anything that comes out of a laptop or a computer, that stuff sounds horrible to me. I need the real thing. Give me a Marshall, a Boogie, a Twin - three Twins! Ain't no substitute for the real deal."

Never The Same Again has a feel that is not unlike Marvin Gaye's What's Going On.

"Oh, that's so sweet of you to say that! That's the nicest compliment anyone's ever given me, man. I love Marvin Gaye. Yeah, yeah, thank you. Marvin Gaye and Patti Labelle - those are the two people I was thinking of when I was playing it."

The percussion work on the song Macumba In Budapest is phenomenal. As a guitarist, how do you work off of rhythms?

"It's very easy. It's like they're windsurfing. For me to play with conga players and timbale players and drummers, it's like windsurfing. You don't have to do much except close your eyes and go. They're creating waves, rhythm waves… Hey, that's a great title for a CD! [laughs]

"I know when to dance with them and when to goat them. Complementing is knowing where and when to add something, to throw more logs on the fire. It's OK to not be embarrassed because you have a lot of energy."

Your son Salvador plays piano on two songs, Canela and Ah, Sweet Dancer. As both a father and musician, what's it like to play with him?

What would you like to be able to do on the guitar that you feel you can't?

"You know, at this point, the only thing I'd like to do is experiment with supersonic sounds - like Jimi Hendrix before he went to the National Anthem or before he played Wild Thing. There was a celestial texture that he achieved, and the only other person who got to that same place was Stevie Ray Vaughan. Here it comes: celestial supersonic textures.

"You open up the guitar and the amplifiers, and all of a sudden it's like an Aurora Borealis of sound. If you don't know what you're doing, it can sound really corny and awful. But if you know what you're doing, it's like all of the dinosaurs in the world are screaming, with motorcycles from the Hell's Angels. Jimi Hendrix knew how to create a texture on a big canvas, but it wasn't noise - it was art."

You start a two-year residency at the House Of Blues in Vegas soon. Will you be able to do any other touring during that time?

"Oh, yeah, sure. There's days off during the week, and I'll have months off at a time, so I can go out and tour with the Allman Brothers or other people. It's not like I'm doing time in San Quentin or anything. [laughs]

"It's going to be a lot of fun; I'm looking forward to it. For me, it's going to be like having a laboratory where I can experiment with new alchemy. I know the songs that people want to hear, and they're going to hear them, but I get to bring new intros, middles and endings. And in the middle of the show, I can go to places nobody knows about for half an hour or so. It'll be like the Grateful Dead. I'll play what I don't even know how to play."