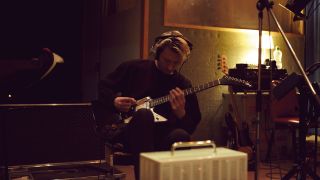 Maybe the planets are aligning for Dinosaur Pile-up, or some similarly weird astrological voodoo is at play, but Matt Bigland has been seeing the same numbers everywhere.

This happenstance numerology presented him with the title of the Leeds-based trio's third album, 11:11, and now everyone connected with the band is seeing numbers, too.

"It really quickly became a thing for the band," he explains. "I started seeing 11:11 everywhere and wrote that song when the guys and I were messing around with that riff, and then everyone started seeing the numbers 11:11. Everybody who was working on the record, like [producer] Tom Dalgety and the whole team, everybody sees 11:11 now."

While this everyone-seeing-numbers business is probably just an unfortunate side-effect of reading guitar tab on an empty stomach, there's a less mystical secret behind 11:11's more physically intense sound, that can be divined from the road miles Dinosaur Pile-up clocked up while touring Nature Nurture.

That sort of regime hones the chops, and more to the point the live show is the environment in which Dinosaur Pile-up's giganto-riffs and hooks best translate.

Everything was tracked live, resulting in a big, heavy sound

With this the first album they have recorded as a band (hitherto Bigland wrote and recorded everything), Dalgety (Royal Blood, Opeth) was keen to capture that vibe on tape, and to do that he wanted them to track everything live.

"Off the back of touring Nature Nurture, we were just getting heavier and heavier in the live set, so by the time I had written all these songs, all the songs reflected how we had become live. There was a bunch of really heavy songs. It was super-exciting putting down takes."

Dinosaur Pile-up recorded 11:11 at Rockfield Studios in Wales, and Bigland tracked most of the album with his "super- hot" Gibson Explorer, a Gibson 325, a Les Paul Custom and a Tele.

Can you spot the odd one out in Matt's none-more-black guitar collection?

Amps-wise, he used a variety of Marshalls, Orange Tiny Terrors and an Egnater Tweaker-40. He largely eschewed any radical gear experimentation for what became an impulsive, instinctive recording session.

Dinosaur Pile-up have always gone big with their sound, but most of all they've always gone wherever the energy has taken them. Bigland was exhausted upon finishing Nature Nurture, but with 11:11 in the can and ready to go, he's invigorated.

"[Tom] was all about the energy," says Bigland. "It was quite an intense process, because Tom likes to work; he just throws you in there. It's all so instantaneous. There wasn't a day where we sat tweaking the amps, finding pink noise. That's not what this record is about. It's about kicking ass."