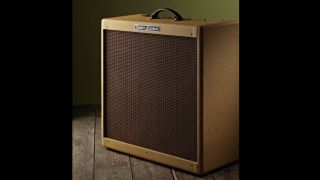 Don't be fooled by the name: the Bassman is revered by guitarists, too

When Fender launched its Precision Bass (the first mass-produced, solid-bodied electric bass) back in 1951, it revolutionised the sound of the bottom end in popular music. It also rattled the hell out of the tiny valve guitar amps of the day.

Never one to miss a trick, Leo Fender decided to add a purpose-built bass amplifier to his catalogue. Loaded with a single 15-inch Jensen speaker, and featuring an all-valve- driven 26-watt output, the first generation Bassman combo soon attracted the attention of just as many guitar players as bassists. Country, blues and rockabilly guitarists fell in love with the amp´s sweet compressed tone when the volume control was cranked up.

While even the team at Fender acknowledged that the original Bassman was the best amplifier they ever made, that didn´t stop the firm launching a redesigned version in November 1954. Boasting four 10-inch Jensen P10R speakers (another industry first), the second generation Bassman now pumped out 40 watts of spine-tingling valve brilliance.

The 1952 Bassman featured a ported, tweed-covered, closed- back cabinet, establishing a template for almost every bass combo designed in the past 60 years. Curiously though, the ´54 model had an open-backed cabinet... just like a guitar amp.

That the Bassman was a guitar amp in all but name was nailed down forever when Jim Marshall and designers Ken Bran and Dudley Craven copied a 4x10 model´s circuit for their first Marshall-branded amp head, the JTM45, launched in 1962. As it happens, Fender had already dropped the onboard speakers - and the tweed aesthetic - in the early 60s, re-launching the Bassman as a blonde Tolex-covered head.

Two 1963 Bassman reboots are at the heart of rockabilly genius Brian Setzer´s live rig and his solo and Stray Cats records, including Rock This Town. Hendrix was rumoured to have used a Bassman in the studio, while Kurt Cobain definitely ran his Mustangs and Jags through one during the recording of Nirvana´s Nevermind in 1991.

Josh Homme even had one in his Them Crooked Vultures backline. The Bassman has become so synonymous with the six-string fraternity that when Fender reissued the ´59 4x10 model in 1990, it finally took the hint and changed its designation from bass to guitar amplifier.

1960: The Bassman is redesigned as an amp head