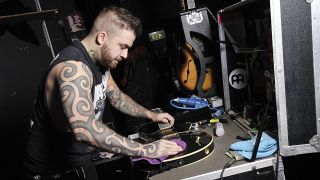 A roadie used to be the van-owning surly bloke at gigs with his ass crack out. These days, a guitar tech is a problem-solving, gear-knowing machine. They're the unsung heroes who keep your favourite bands' live shows ticking over.

Teching is a viable career that requires skill and know-how. Before crossing the floor and manning bass and guitar for Slipknotand Krokodil respectively, Alex 'Vman' Venturella teched for Fightstar, Coheed And Cambria, Mastodon and many others. Here, he revealed what the job is really about…

How did you get into the world of guitar maintenance?

"I remember getting my first electric guitar and I was always tinkering with it. I must have been about 16 and I put a huge ding in it, and there wasn't much on the internet then on how to fix it. So it was books, and then I got into basic repairs. It all kind of flourished from there, really."

What was your first job as a tech?

"I was a guitar teacher and I would fix students' gear. There was a local shop in Edgware, and every now and then the guy there would send me stuff that he couldn't fix himself. It was a word of mouth thing, and I've never set up a website or a shop, which is the way I like it. My first paid gig was when Charlie [Simpson] left Busted. I remember just fixing some of his gear and he asked if I wanted to come and work for Fightstar. I was with them for about five years."

What kind of work would you generally find yourself doing on the road?

"Whereas most guitar techs or people I see on the road don't touch fretwork or adjust the necks, and if a nut wears down they'll just put a bit of paper in there, I would do heavy modifications, fixing fretwork. And electronics as well; I've always taken pedals apart and fixed them. I've always tried to do that instead of ringing up a company and getting a new pedal in."

Was there much learning on the job?

"The technical side I was great at, but I didn't have the roadie etiquette. I looked at it more as a kind of holiday camp in the beginning. For the first couple of years, I didn't take it seriously, whereas now it's a professional thing - you can't be messing around on the job."

Do you think it helps that you've been a gigging guitarist as well?

"It's like a pride thing. I want the guitar to play as good as someone who pays for a guitar setup. So on the road, I want    the guitarists to have a guitar that I'm chuffed about too. That's the way I've always looked at it."

How have you earned money between tours?

"I repair gear - that's always been an income. It can range, though. One day, you've got 20 guitars through the door, the next you've got just one in a week. That's why teching has been my main money-earner. When I come home, it's more relaxed, more of a holiday."

What are the typical repairs that you'll get?

"Amp repairs, like trying to get a dead amp working again, all the way to refretting, some finish work. I've never done major overhaul work, but with a refret I try to give my experience to customers so they don't keep having to come back. It varies because you never know what you're going to get."

Can you recall any particularly challenging jobs over the last few years?

"I get that with different amp companies sometimes. Some companies like to use printer ports [for the footswitch]; you're trying to fix a switching system and you have to go online and try and find where all the pins run out. When it's basic MIDI, it's in and out of there."

Good guitar repair knowledge has been essential to Alex's success

What are the most common things that will go wrong at gigs?

"It'll usually be if we've got hired-in gear. Onstage, the guitar rigs should stay constant. I always check measurements every day to make sure the necks haven't moved. But the more that you get into it, the less problems you might have.

"Six or seven years ago, I'd be running around a lot more onstage, whereas nowadays I'm sitting more on a chair looking at an iPad. That's a good sign - it means you're doing your job."

Is getting a tech job all based around word of mouth and reputation?

"The Coheed one was a good example. Their tech had to fly to Australia for another gig, so [the promoter] rings me up and asks if I can do the show. So I turn up and meet the guys, and they have these big MIDI switching systems.

"Claudio [Sanchez] had a lot of gear and he was like, 'Don't touch anything - leave it alone.' But there was ground hum in his rig that was horrendous. He said it had been there for years and to leave it alone. I went and fixed it anyway. Then after the show he came up to me and said, 'Man, that's the clearest my rig has ever been.'

"It was just a few ground loops here and there. Three weeks later, I got a call asking if I wanted to come and work for the band. Some techs are not repairmen, but I'd jump in."

So repair knowledge is really the secret of your success?

"Exactly. At Mayhem festival there were a bunch of bands who couldn't afford to take a tech on the road. It's them in a van going across the States, which sucks. And they break their gear a lot because it's cheaper gear.

"So I would go over to the smaller stages and see friends I knew over there and set up as a kind of guitar fixer. Not for money or anything, but you just get bored and you want to help people out.

"Like Job For A Cowboy, they just had problems every night, so I was fixing their basses, guitars, and putting new pickups in. I was more like a handyman!"

What's an average day like for a guitar tech on a UK tour?

"A medium-sized band at a 2,000-capped venue, you're looking at getting up at 9 or 10am, checking the venue out and having a walk around. Check that load-in is going to be on time. Get the gear in, and then depending on how big the production is, you have to make sure lighting is in first, and front of house is all set up and you're not crossing wires. That's another problem you run into. Even some bigger bands now can't afford proficient expensive techs, so people cross paths with each other.

"Whereas with a more experienced crew it's like clockwork. You knock a soundcheck out later in the day, fix all the problems from the last night's show. You hit show time, and then it's packdown again."

How long after the band finishes will you usually still be working?

"It all depends how proficient the crew is. With Mastodon it's an hour. Once the band is offstage we're in the truck an hour later and it's chill-out time before we do the same thing the next day."

"Challenging in terms of it being a time restraint, I've had to rewire a pedalboard a couple of times when the artist is unhappy with it and they want to change it around. You've got an hour until you're onstage. That's always a pain in the ass."

The reality of being a tech means a lot of travel and being away from home. Is that something that tends to be underestimated by newcomers?

"It is, yes, I always see on Facebook with friends [who are techs, too] that have kids and them having to say goodbye to their kids, and then they're gone for three of four months. That's really tough, and it's a pretty shitty job if you want to keep up a steady relationship. I think that's something that gets overlooked when people see being on tour as a kind of party zone and just having fun. The reality is it's a bit of a solo mission."

Do you modify gear a lot?

"Opeth actually used one of my amps on their new record. It was a Soldano clone that I built, and one of my overdrive pedals. I build pedals, too - I took four of my favourite overdrive pedals and went through each one asking, 'why does it sound that way?' Then I made my own version of it. With the amps, I'm a big Soldano fan, so I took a bit of a Diezel preamp and stuck it with a Soldano power amp stage. It's fun."

You're a big fan of Mastodon, and became part of the band's family in a sense as a tech...

"It's pretty amazing. About seven years ago, I sent a message to them on MySpace, saying, 'Hey I'm a guitar tech, I'd love to come and work for you - you're my favourite band.' I didn't hear back or anything, but lo and behold years later I was on the tour bus one day and went through my old messages and found it. It made them chuckle. So if you put your mind to it, you can eventually work for your favourite band."

How to start teching

World tours with your favourite bands are the ultimate dream, but if you want to make it as a tech, you need to learn your craft. Here are some ways that you can get going...

Okay, so fiddling under the bonnet of an amp can be dangerous, and shouldn't be attempted if you're unsure of what you're doing.

However, learning to change valves and replace/fix dodgy controls and sockets is a valuable skill. Having a go at making your own pedals can also be a great way to learn about the inner workings of your gear.

Every guitar that gets sold needs a setup, so where better to hone your skills than your local gear arsenal? Guitar shops will often have an in-house technician, but it's worth checking around. Be honest about your abilities, get ready to change a lot of strings, and learn how a kettle works.

Put your name out there

Find local musicians in need of a setup and offer a reduced rate to help get your name around. A regular setup (action, intonation, string change and check-up) will cost between £35 and £50.

Amps, effects and switching are a tech's bread and butter. They're also the source of many mid-set panics for guitarists. Get to know how signal flows around a guitar rig, and how you can improve it. From here, you'll be the ultimate onstage wingman.

Get to know your scene

Go to gigs, meet the best bands in your area, get to know local sound engineers, and help them out. Word of mouth is your main reputation builder, so become the go-to guitar tech by being reliable, professional and knowledgeable.