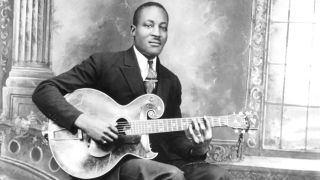 Big Bill Broonzy blazed a trail many were to follow (Image credit: Corbis)

ACOUSTIC WEEK: Blues is a wholly American music form, and as the steel- string flat-top acoustic guitar was a product of European immigrants into the United States, the two were destined to be synonymous with one another. The portability of the guitar and its closeness in tone and volume to the human voice also made it the obvious choice of the lone, travelling musician.

The blues originated in the cotton fields of the Deep South, through the work songs, spirituals and 'field hollers' of African slaves. But soon after the turn of the 20th century, it had become the fully-fledged form that we recognise today, with call and answer verses over a usually 12-bar sequence. WC Handy published the music to the instrumental Memphis Blues in 1912; the tune became a hit and blues transformed from what was termed 'race' music, into a popular style alongside jazz and ragtime.

The earliest exponents of acoustic guitar blues that we know of include Charley Patton, Son House and Willie Brown. Patton had been born in southern Mississippi before the turn of the 20th century and was playing around the Southern states by 1914, singing songs such as Down The Dirt Road Blues and Pony Blues. As well as clever rhythmic playing, his guitar style included slapping its body, playing it between his legs and behind his back. Patton teamed up with guitarist Willie Brown in the 1920s and then befriended preacher and blues man Son House. House's own Preaching The Blues would have a considerable influence on a young Robert Johnson.

Johnson was 20 years younger than Patton and almost 10 years House's junior. He followed them around to gigs from Memphis to Robinsville and began learning the guitar, but was chided by the older men for his ineptitude on the instrument. Johnson left House and Brown and returned home, where he practised hard and learned fingerstyle blues and slide guitar, his high, lonesome voice creating the archetypal blues sound. When he later met up with his mentors, they were astounded at his progress, leading to stories of how he sold his soul to the Devil in return for prowess on the guitar. In Johnson's song Cross Road Blues, the final line is "Tell my friend poor Willie Brown, that I'm standing at the crossroads, believe I'm sinking down".

Patton, Son House and Johnson would go on to influence the next generation of acoustic blues guitarists. Many of these would adopt Johnson's call and response slide and vocal style, and many would choose the new and powerful resonator guitars made by Dobro and National. John Lee Hooker, Sonny Boy Williamson, Elmore James and Howlin' Wolf learnt to play on acoustic guitar and began plying their trade on it, but would all soon turn to the louder electric instruments that were proliferating from the mid 1930s on.

Early blues may have fallen foul of racism, but within the genre it certainly wasn't sexist. Some of the biggest early names were Ma Rainey, Bessie Smith and the amazing guitarist, Memphis Minnie. Minnie was famous around the Southern states during the 1920s, but moved to Chicago the following decade, where she put together a blues combo using bass and drums and pre-empting Muddy Waters' Chicago blues by a decade. Waters would cover her big hit Bumble Bee, renaming it Honey Bee.

In 1943, when Waters left Mississippi and headed for Chicago, swapping his acoustic guitar for an electric, acoustic blues might have died on the spot. But while Waters' music did indeed cross over to an intrigued white audience, there were others, like Leadbelly, Blind Lemon Jefferson, Big Bill Broonzy and Josh White, who continued playing acoustic blues.

Eric Clapton followed in the footsteps of the blues greats (Credit: Antoine Gyori/Sygma/Corbis)

Huddie "Leadbelly" Ledbetter, a Louisiana musician renowned for his mastery of the 12- string guitar and for popularising the tune Rock Island Line, worked with Jefferson as early as 1912, and continued into the 1940s spearheading the folk movement. Big Bill Broonzy and Josh White both courted the folk-blues movement of the 1950s. In the 1960s electric guitars took over the blues, adding power to numbers penned by Johnson and his contemporaries.

In the decades leading up to the present day, artists like Bob Brozman, Mose Allison and a host of others continued to ply their wares using guitar techniques that dated back to Elmore James and Robert Johnson. But one of Johnson's greatest admirers would put acoustic blues back on the map. Eric Clapton's Unplugged album was a giant seller, alerting eager listeners to an early form of music that had all but vanished from the public radar. After Unplugged, artists such as Kelly Joe Phelps and Eric Bibb had clear passage to continue a form of music so instinctive as to cut to the soul of anyone willing to listen.

1891
Charley Patton, who influenced both Son House and Robert Johnson, is born in southern Mississippi

1911
Robert Johnson, who would become the most influential blues singer and guitarist of all time, makes his first appearance

1912
WC Handy publishes the sheet music to Memphis Blues, an instrumental 12-bar that crosses over to white audiences and sets up the blues as more than just "race" music

1938
Robert Johnson is poisoned by a jealous husband and dies in Greenwood, Mississippi

1943
Muddy Waters moves to Chicago and, a decade after Memphis Minnie had done the same, put together a full blues band. Waters would transform the blues into a powerful new electric form

1963
Blues-folk singer and guitarist Josh White is voted above Bob Dylan in a US folk music poll. White plays at Martin Luther King's march on Washington

1973
Memphis Minnie dies in the town she named herself after

1992
Eric Clapton records Unplugged for MTV. The album is a massive seller, scooping an armful of honours at the 35th Grammy awards the following year and spawning the hit single Tears In Heaven. Bob Brozman releases A Truckload Of Blues

1997
Eric Bibb releases his album Me To You, showcasing his superb singing voice and genuine acoustic blues guitar style