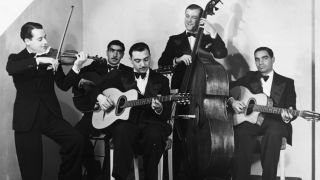 Peter Frampton remembers the first time - the very day, in fact - that he heard the music of Gypsy Jazz guitarist Django Reinhardt. It was Christmas morning 1961, when the budding axeman received a copy of The Shadow's first album. "They were Cliff Richards' backup band," Frampton says. "We all loved them in England, of course. This was their instrumental album, and I couldn't get enough of it. I think I totally monopolized the record player listening to it."

To go along with the family's new turntable, Frampton's parents also bought another album: Django Reinhardt And The Hot Club Quintet. "This was Django and his group with Stephan Grappelli, the violinist," Frampton explains. "My mother and father were into that style of music. After I gave up control of the record player, my father put it on."

And Frampton's initial reaction? "I couldn't get out of the room fast enough!" he says with a laugh. "To me, that was 'acoustic old people's music.' It's very much like what my own children say, only they call it 'Ugh! Dad's listening to that silent movie music again.'"

Pretty soon, however, Frampton found himself returning to the room, strangely drawn to the guitar master's highly lyrical, graceful phrases and solos. Eventually, he started spinning the record himself. "It didn't take that long for me to get it," he says. "It became evident to me that this man, Django Reinhardt, had full command of his instrument, to say the least. He became a real favorite of mine, and ultimately one of my real guitar heroes."

When you first heard Django, you were into early rock 'n' roll and, I assume, some blues guitarists. Was Django your first real exposure to jazz?

"Yes, but I think that I was exposed to him before blues, because at this point I was listening to Buddy Holly, Eddie Cochran, Gene Vincent, Scotty Moore with Elvis - that sort of music. This was pre-discovering the blues. We had just come out of a skiffle period in England, which was sort of folksy. It was a time when music tastes were changing quickly, though. It wasn't until after I'd heard Django that I discovered 'the Kings' - BB King, Albert King, Freddie King - and then Buddy Guy, Lightnin' Hopkins, Howlin' Wolf, Muddy Waters and so many other great players. Django made a big impression on me before I heard those guys."

Of course, we have to mention the fact that Django only had full use of two of the fingers on his fretting hand.

"Absolutely. His hand was badly burned because of a terrible fire. Because of his efforts to save his family, a couple of his fingers were burned and withered, and I think his leg was burned, as well. It was really serious. But he taught himself to play again and did so beautifully, with a lot more control than so many other guitarists who had full use of their fingers. That's pretty amazing. Most people would have given up and done something else, but Django went right back to it and overcame a tragedy."

"He could be so delicate," Frampton says of Django Reinhardt. "He really covered every mood and shade." © Ralph Notaro/ /Splash News/Corbis

Did you know about Django's injuries before you started listening to him, or did you find out his backstory later?

"It came along with hearing him. When my dad put him on, he said, 'Listen to that - and the man can only use two fingers on his left hand.' So it was sort of jaw-dropping once I got the story on this 'old people's music' and it became my music." [Laughs]

Was it inspirational to you? "If this guy can do it with only a couple of fingers… "

"Oh, obviously. That's a heroic thing. Talk about being stubborn and driven. I've always considered myself to be a very driven person, and I could tell that Django had a real playing ethic. To be that good with all of his faculties would be enough right there, but when you consider what he was dealing with, sure, it was very inspiring."

From hearing that first record, did you then buy his other albums and follow his music?

"Oh, yeah. Absolutely. I started off with that one album, which was sort of a 'best of' from two different periods; one side was Django and Stephan before the war, and the other was the wartime period when Django stayed in France and Stephan stayed in England. So you had the '30s and the '40s. But I did seek other Django music out, absolutely."

If you can pinpoint one thing, what was it about his playing that really reached out and grabbed you?

"I think it was more about his soul. Yes, his dexterity, even with his handicap, was immense - he could play incredibly fast. I do love and appreciate that technique, but what I really appreciate about Django is his choice of notes when he's expanding on the melody, and that comes from inside. The passion that he put into each note was unbelievable - I think that's part of his gypsy soul. The man played with fire. He was ferocious.

"And yet, he could be so delicate; he covered every mood and shade. More than everything, yes, I appreciate his chops, but it was his choice of notes and the way he made you feel when he played. There was such a beautiful melodic soul that came out of his music."

When you were learning guitar, were there any Django tracks that you tried to master yourself?

"Yeah, Nuages, which is 'clouds.' My company is called Nuages Music Ltd., so that goes to show you how much I love that one. That was my favorite Django track. I have so many - my iPhone has them all. Whenever I put my phone on shuffle, I'm bound to get a couple of Django songs in the first 15 minutes."

Were you the only kid in your neighborhood who knew about him? Did you expose anybody else to him?

"I can't remember if anybody else knew about him. The watering hole of music at that time was more American in nature, apart from our Shadows and bands like that. Then there was The Ventures in America - 'surf music' it was called in the States. Everybody was sort of aware of Django, but I don't know if they'd actually heard his music.

"With us, we went from Buddy Holly and Eddie Cochran to The Shadows; then The Beatles came out, and from there we started listening to Motown. And then it was the blues. We had these whole other genres to catch up on. It wasn't until later on that I knew about the contemporaries of mine having also listened to Django Reinhardt."

How do you think Django influenced your guitar playing? Are there certain aspects of what you do that you can point to?

"That's a very difficult thing to take apart - your style. I mean, I steal bits here and there, but it's nothing you might be able to hear. Every bit of music I've listened to has gone into my library of information. One day, I woke up and I played the way I played; I had my style. I still listen to as many guitarists as I can get into in a single day - and hopefully, I steal from the best." [Laughs]

Any particular records you would recommend to somebody wanting to check out Django Reinhardt?

"Unfortunately, you can't do it on vinyl anymore, not unless you've got a relative with some old albums. But just go to iTunes, type in 'Django Reinhardt' and pick any of his best-of collections. You will be floored. It doesn't matter which one you pick up first. There's about 250 different songs and instrumentals that he played on - maybe more. If it's got Nuages on it, you'll love it. Oh, and Swing 39 is a great one. That's a really incredible track."

So, I have to ask: What did your father think when you finally got into his "old people's music"?

[Laughs] "Oh, I don't think he was surprised. I think he realized that I was now really serious about the guitar. Instead of just wanting to learn how to play the hits of the day, I was looking backwards and seeing where the guitarists I liked came from. I think my father was pleased that I appreciated that style."