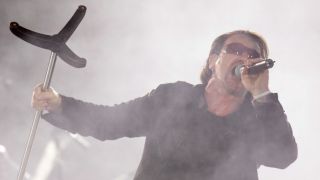 "I've always been intrigued by and drawn to Bono," says singer-songwriter Matt Nathanson. "He's the guy who seems to drive change in U2." (Image credit: Stephane Cardinale/People Avenue/Corbis)

Since releasing his debut album, Please, in 1993, Matt Nathanson has established himself as one of the most creative and popular purveyors of modern folk-rock. But the San Francisco-based singer-songwriter didn't grow up spinning The Anthology Of American Folk Music; surprisingly, he spent most of his youth idolizing bands like Kiss and Def Leppard, and he credits four guys from Ireland with opening his ears to other musical sounds and genres.

"It was in 1983, and I heard New Year's Day from the War record," Nathanson recalls. "I really liked it, but I didn't commit to the band till I bought Under A Blood Red Sky on cassette. I remember MTV was playing Sunday Bloody Sunday from that Red Rocks show. I think that was the first time I actually saw Bono do his thing, where I became fully aware of his passion and power. I remember watching him and going, 'What the hell is this? This is great!'"

A year later, Nathanson bought a copy of U2's The Unforgettable Fire. The band's experimental collaboration with producer Brian Eno sealed the deal for him. "I remember listening to it at Christmas and just losing my mind," he says. "I was tripping on how weird it was, how it resolved itself but satisfied me completely. It seemed like it was beamed down from another planet. And everything Bono was doing - his sound of his voice, his approach to lyrics, the way he just kind of jumped out of the tracks - it really opened me up and got me to start transitioning from metal to other types of music."

It's interesting that U2 - and, in particular, Bono - would make such an impression on you when you were a metal-crazed teen.

"There was something I got about him pretty quickly. Bono doesn't do anything halfway. He'll drive right into a wall to make his point. He'll be sticking his head out the window while he drives into that wall. [Laughs] Nothing gets in his way. There's a fearlessness about him that drives the whole band. I think that's something to be admired and emulated. It's certainly how I've tried to go about the music I make."

"Bono, over the course of U2's history, has been the engine that powers the band. Part of that's the role of being a frontman - you have to go heart to the hoop. It isn't about subtlety. You're not going to command the world stage by fading into the wallpaper. In my view, he's always sort of pushed the evolution of the band.

"The other guys are all brilliant and crucial to the success of U2. They're one of those bands you can't picture with any other members. It's all of them or none of them. But I've always been intrigued by and drawn to Bono. He's the guy who seems to drive change in U2. If they're doing to do something new, he's leading the charge."

When was the first time you saw them live?

"I saw them on The Unforgettable Fire tour, and I was floored by how they connected on an immediate level with the audience even when playing some of their newer, more experimental songs. Bono's need to connect in the early days of U2 was pretty remarkable. It really hooked me. I kind of divide the band into three periods: There was sort of the post-punk passion period, then were was a passion theater period, and next was the full-on theater period we're in now. It doesn't mean there's no passion in it anymore; it just means that the spectacle has overtaken a bit from the bombast.

"And I mean 'bombast' in a good way. They grabbed you. But what I think happened somewhere in the '90s was, they realized that they had to pull it together more. They were playing these huge places - one night be incredible and the next was hit-and-miss. There were still incredible moments in their show, but it became more about delivering a consistent experience to people."

Bono has always delivered a specific worldview in his lyrics. Did that affect you early on?

"When they did The Joshua Tree, that's when they really started to embrace America - and a certain idealized view of America. It was there in their music, their appearance and their whole thing. And you know, as a kid, I didn't know who Cowboy Jack Clement was. I didn't know what happened at Sun Studios. That just wasn't my history. I didn't even know Elvis! [Laughs] But Bono would talk about them in interviews, and I got interested in all of that.

"He kind of got raked over the coals for it after a while. I was hanging out with Chris Isaak recently, and we were talking about Sun Studios - he recorded a great record there. Chris is such a fanatic about Scotty Moore and Elvis and all those guys. I told him that what got me to learn about that whole scene was reading interviews with Bono around the Rattle And Hum period. Suddenly, I wanted to learn all about Sun Studios and what went on there.

"So, yeah, Bono got lambasted for it, but I think that he and the band were just discovering their influences. They were excited and they wanted to share it. So it cracked things wide open for me. He and the band were the ones that shined that light on what had gone down in American music - for me, anyway."

U2 in 1985: (from left) Adam Clayton, Bono, The Edge and Larry Mullen © Neal Preston/Corbis

They did get slammed for it - unfairly, I think. To me, it was no different from what The Rolling Stones did in the '60s. They were giving American rhythm & blues to young kids who didn't know what was in their own backyard.

"That's right. I totally agree. I mean, it's hard - we certainly don't wanna be told that we don't know what the fuck's happening in the United States. We can be a very prideful bunch - I get that. When five guys from England or four Irish kids are shining a light on your musical history, it's a little strange. But sometimes it takes people from another land to sort of appreciate and celebrate what's going on somewhere else. How many people would've known about Muddy Waters and Elmore James if the Stones hadn't brought them to the forefront?"

We use the term "fearless" a lot to describe certain artists. The word is overused, but I think in terms of U2 and Bono, it's a very apt descriptor.

"That's right. I think that fearlessness in music is the only thing worth focusing on. As I get older and I dissect what turns me on about music, I find that great artists have to have a bold vision, that willingness to go way out of your comfort zone. That's what yields the best results. The only way to go super-far is to risk falling on your face or eating shit. Bono is the king of that. That's why separating him from the band is important.

"Like I said, the band is absolutely necessary - believe me, I could go on for three days about how much I love Adam Clayton. But Bono is the turbo engine that always propels them. Sometimes there's successes in that, and sometimes there's failures. But nobody really remembers the failures. I Was Made For Loving You by Kiss - who cares? I remember Destroyer. Same with U2: Nobody cares that Pop wasn't so big or that Passengers was kind of a weird thing. They know the stuff that really connected, and U2 has a lot more successes than failures. Their fearlessness drives all of that. You have to be willing to lose big to win big."

Are there any particular lyrics that Bono wrote that really stick with you?

"What I really liked was what he started doing on Achtung Baby. He was introducing these descriptors that weren't these huge, generalized things. They were more Tom Waits-like, more nooks and crannies, but they were still super-powerful. There's a song on that record called The Fly, and it's a shtick, but Bono says, 'Every artist is a cannibal, every poet is a thief, all kill their inspiration and then sing about their grief.' It's like, are you fucking kidding me? That's genius! He's got a bunch of 'em. They're flippant lines, but they hit you in a Dylan kind of way.

"To me, lyrically, with Unforgettable Fire, it was like a painting with words. On Joshua Tree, it was very sensual, and he continued that a bit. But on Achtung Baby, he turned it all on himself in a way. The songs were seemingly not about him, but it was all about him. In my opinion, Pop has some stellar lyrical moments, too.

"Part of that comes from probably being a megalomaniac, which, you know, he's a lead singer - that comes with the gig. I don't know what he's like as a person, but you have to consider that he's stayed with the same woman forever, and he's been with the same band since, like, 1976. That says a lot about him as a human being.

"More than anything, it's about being true to yourself. Bono's that way, and so is the rest of the band. They'll take themselves apart and put themselves back together, and they're always looking for whatever it is that gets them off. They're never complacent. I think a lot of musicians should look to them and take that spirit to use in their own ways."