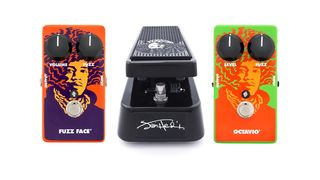 Jimi would have hit 70 this year - well worth a celebration pedal, we say

Unveiled in November, the four pedals - which include the Fuzz Face, Octavio, Univibe and Hendrix Signature Cry Baby - were released to celebrate Hendrix's 70th birthday.

For more information, visit the official Dunlop website, or read the full press release below:

November 2012 marks Jimi Hendrix's 70th birthday, and Jim Dunlop are celebrating it by releasing the Limited Edition Jimi Hendrix 70th Anniversary Tribute Series. It's made up of the four effects that were crucial to Hendrix's signal chain: Fuzz Face, CryBaby, Octavio and Univibe.

Designed by the MXR team, the Fuzz Face, Octavio and Univibe come in Phase 90 -sized housings with modern upgrades such as true bypass switching, bright LEDs and 9-volt power jacks. The Jimi Hendrix Signature Cry Baby, along with the other three pedals, is adorned with art inspired by John Van Hamersveld's classic poster from Hendrix's 1968 Shrine Auditorium gig.

With a Fuzz Face, Hendrix could elicit an endless variety of tones by using different pickup combinations, manipulating his guitar's volume control, and picking at different areas of a string.

The Jimi Hendrix™ 70th Anniversary Tribute Series Univibe delivers the classic shimmery, washy tones of vintage Hendrix in all of their stunning analog glory, and at a fraction of the size of the vintage Shin-ei unit that Hendrix used in late '69/'70.

Porting the exact same circuit found in Jimi's original "cheese wedge" Octavio®, the Jimi Hendrix™ 70th Anniversary Tribute Series Octavio provides the classic "octave up" effect that Hendrix utilized so potently on tracks such as "One Rainy Wish," and "Purple Haze," and its amazingly touch-sensitive response will inspire new and uncharted sonic territory.