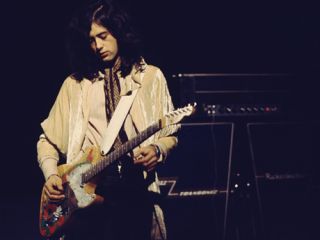 Jimmy Page with his 'Dragon Tele' in 1969. © JazzSign/Lebrecht Music & Arts/Corbis

With the possible exception of Jimi Hendrix, no guitarist has had more of an impact on rock 'n' roll than James Patrick Page, or as he's better known, Jimmy Page. The king of the monster riff - architect of one of the most popular and enduring bands in history, Led Zeppelin, and the first guitar player to know that a Les Paul looked impossibly cool when slung way down low - turns 67 today, Sunday, 9 January.

Born in Heston, Middlesex, England, Page picked up the guitar at the age of 12. Although he had a keen interest in science (as evidenced in the first video - he wanted to do cancer research, God bless him!), Page became enamored with early rock 'n' roll and rockabilly, teaching himself the licks of Elvis Presley pickers Scotty Moore and James Burton.

Before long, Page got turned on to the blues: Elmore James, BB King, Buddy Guy and Freddie King, among others. Mix those up with the sounds of Elvis and Buddy Holly and you have a pretty good idea where Jimmy's head was at when he bagged art school and started playing on his first sessions in London. Record makers came to rely on Page, who was both versatile and dependable, and during a dizzying two years in mid-'60s London, the guitarist became the go-to guy on the scene, playing on hits by Marianne Faithfull, Petula Clark, Van Morrison & Them, The Rolling Stones, Donovan, Nico - the list goes on the on.

In 1966, Page officially joined The Yardbirds, the popular blues-based, pop-rock band that had been courting him since 1964. Page made his presence felt in the group, and after vocalist Keith Relf and drummer Jim McCarty split in 1968, he briefly called a new outfit he had formed, one which included singer Robert Plant, bassist John Paul Jones and drummer John Bonham, The New Yardbirds. A joke attributed to both Keith Moon and John Entwistle of The Who, that the new band would "go over like a lead balloon," prompted the guitarist to call his foursome Led Zeppelin. You know the rest.

And so here, on Jimmy Page's 67th birthday, we offer some of his finest and most memorable video performances.