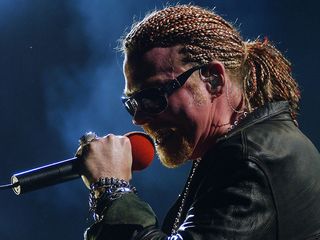 Rose goes on late - too late for some folks (Image credit: Mate Nandorfi/epa/Corbis)

Apparently, Axl Rose and the band he calls Guns N' Roses know how to clear a room. Friday morning in New York City (or late Thursday night, whichever you prefer), the group performed at what used to be the famed CBGBs - and by the time they finished, the place was half empty.

According to Brooklyn Vegan, Rose and GN'R played at the John Varvatos boutique in the East Village, hitting the stage just after 1am for a 17-song set that weighed heavily on songs from the album Appetite For Destruction. (See video of My Michelle below.)

Axl's enthusiasm and the band's loose vibe, however, weren't enough to hold the audience, many of whom had exited by the time the group finished their last song, Night Train. Guess Rose shouldn't be 'fashionably late' to all of his gigs.