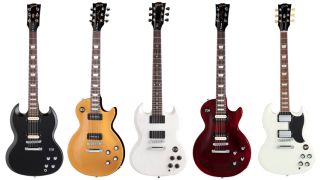 Some of the class of 2013 revealed

US retail site Sweetwater has made available to order 69* new-for-2013 electric guitars from Gibson USA. Yes, you read that correctly. In what seems to be a complete overhaul of the company's Les Paul and SG lines, many models such as the Studio and Standard have been updated, alongside several wholly new launches.

Debutants include the streamlined and highly affordable SGJ, plus SG and Les Paul Future models that feature asymmetrical neck carves and Steinberger gearless tuners. Given that Gibson's highly-publicised wood-related difficulties with the FBI were finally settled in August 2012, it's interesting that this year's fingerboard material of choice, 'baked maple,' seems to have been sidelined for 2013, with rosewood 'boards appearing throughout the new ranges.

Right now we're getting a little bleary-eyed trying to make sense of all these new guitars, so check back tomorrow for more details. See Gibson's new 2013 Les Paul and SG guitars on gibson.com.